Hello everyone. My name is Tim Brannan. I blog over at The Other Side where I primarily talk about games, RPGs and horror.  I am a game author so I use my blog as a platform to talk about my books, but also to share with others in my blogging community to sorts of things I like to write about.

I have been writing material for games nearly as long as I have been playing them.  I started in 1979 and my first "custom class" was a Healer. And....I am not afraid to admit my first new monster I ever wrote up was a "Smurf". Yeah. I was 10.  My first witch class was written sometime between 1985 and 1986.

This was my fourth year of doing the A to Z Challenge on the Other Side. I have also done it one year on my Atheism blog, The Freedom of Nonbelief and another year at Red Sonja She-devil with a Sword, a shared blog dedicated to the comic book character Red Sonja.  Plus I have guest-posted here before on how to use the A to Z challenge in your own writing efforts and the importance of having a theme to your posts.

At some point in February I was still planning on doing an A to Z theme on Vampires.  I had started the posts last year when I did Demons. I had an idea for a book about vampires and I thought it would have been a good way to do some research.  It was. Till I shifted midstream. 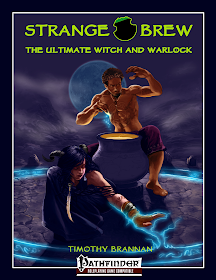 My newest book is now at Kickstarter to get funding for art and printing.  "Strange Brew: The Ultimate Witch & Warlock" is, well, the most complete guide to playing a witch in the Pathfinder game.  A bit of background.  Back in 2000 the 3rd edition of Dungeons & Dragons hit the shelves with the "Open Gaming Licence" which briefly meant 3rd party authors could make their own books for D&D and not get sued or anything like that.  If you followed the admittedly simple rules of the Open Game Licence then you could do it.  Well I did and in 2003 I released "Liber Mysterium: The Book of Witches & Warlocks".  A friend of mine released a similar book for witches called "Way of the Witch". We liked each other books and we were happy.  2013 rolls around and this friend, Christina, decides it is time we mixed our books together with the newest version of the D&D 3rd edition game, Pathfinder (it's not exactly, but close enough).  We added in the Pathfinder witch and some others and decided to kick start it as a project.
https://www.kickstarter.com/projects/962794554/strange-brew-pathfinder-the-ultimate-witch-and-war

So far things are going great!  But my extra writing time was taking a solid hit.  I have 13 years worth and thousands of pages of notes and material to go through.

So to save some time I switched over to the A to Z of Witches.

It was a good idea.  Go through notes, post ideas as they come to me.  I only managed to stay about 10 days ahead of schedule and that was nowhere near enough.  So much for my own advice about theme and planning!

I got a lot of great posts up and in fact have enough for another couple months of solid witch postings.   I got to participate in a "mini-hop" of people doing supernatural creatures during the A to Z as well and that was the best!  I have to give very special thanks to Tasha (Tasha's Thinkings) and Sophie (Sophie's Thoughts and Fumbles) for helping me with the idea and then doing all the heavy lifting afterwards.  THEY, and everyone in the Supernatural mini-hop, really made this A to Z special for me.

If you look at my May 5th post I state I survived the A to Z challenge.  Survived is the right word. Not beat, not won, but survived.  Yes I posted everyday and still got in some of my other posts. Yes I visited my neighbor blogs, but didn't always comment on them.  Yes the material I wrote will find a home somewhere in Strange Brew.

But, I didn't get to interact with other bloggers as much as I wanted. I didn't visit every blog on the list like I have in years past.  And while I noticed that I was getting a good amount of traffic from the Supernatural A to Z and from the A to Z site itself, my regular readers dropped off.  So in that respect I didn't do as well as I would have liked.

I write about games.  That is who I am and what my readers want.  I tried to keep the topics I posted very relevant to gamers, but also to the non-gamers.  Most people in the world don't care if some beastie has 5 HD or 15 HD, you just want to know how tough it is. To gamers that is a big deal. It's a big deal to me.

I love doing the A to Z and I am taking my own advice to heart and starting my 2015 posts this summer.  I am still considering doing vampires. So to make it work there needs to be plenty of material for gamers (what we in the RPG biz call "crunch") and plenty of narrative material enjoyed by everyone else (what we call "fluff").

So what is my plan?


Looking forward to it!

About the Author
Timothy S. Brannan is the author of The Other Side blog, http://timbrannan.blogspot.com/
He has worked on a number of games including the "Buffy the Vampire Slayer RPG", and is the author of “The Ghosts of Albion RPG”, “The Witch”, “Eldritch Witchery” and the upcoming “Strange Brew” which is currently in a Kickstarter Campaign. Please stop by and see if this is something you would like to support.