My name is Sonia Chatterjee and I am an ex-Banker turned writer. My journey as a writer began in September 2017 with the launch of my blog http://soniasmusings.com . I have been one of the eight lucky ones to be picked up for a guest post on this amazing A2Z portal and I couldn't have asked for a better platform to share my thoughts on a topic that has gained a lot of importance in my life recently - the importance of a Mindful Break.

A couple of days back, I finally aced my debut NaNoWriMo Challenge. The novel conceived during this campaign is barely three fourth completed and I also know that when I start editing next month onwards, quite a few chapters are going to get scrapped. But what makes me genuinely happy is the fact that I finally have another story to tell and a way forward. The blog has seen very little of activity this month with NaNoWriMo consuming every minute of my writing time. But today when I sat back to reflect on my journey as a writer, I strongly had the urge to share a very strong emotion that engulfed my senses in the middle of October.

I had started blogging since the last quarter of 2017 but the pace of writing went up to a crazy level when I participated in the A2Z challenge in April this year. As per the rules of this challenge, I was publishing articles every day of the month except Sundays. I ended up writing twenty-six posts in the month and reading even more posts per day. May was even more hectic as this was the month when I made my debut as an author with my novella 'Deal of Death'. This was followed by the Write Tribe Festival Of Words in June that needed me to write every day for a week on certain creative and photo prompts. July was about Bar-A-Thon wherein I was writing every alternate day for two weeks at a stretch. August turned me into a storyteller on camera after I won the Lights, Camera, Chatter contest by Blogchatter and the event Breaking Barriers by Women's Web in Kolkata made me take the plunge into becoming a public speaker. September was about My Friend Alexa campaign turning me into a flash fiction writer as I experimented with a particular theme. This was the phase when my articles were getting their due recognition and I ended up winning badges on BlogAdda, getting featured posts on Women's Web and having top posts on IndiBlogger. I was flying high.

But October was meant to be a different month. The statistics related to the blog like DA, PA, Moz rank, Alexa Rank and Indi Rank had started looking good. With the beginning of the toddler's preschool vacation, we had planned a trip to our native town to soak in the festivities associated with Durga Puja. I had still decided to work on a series called Bloggers Durga Puja during this period. However, after wrapping up of the festivals, there was a strange sense of fatigue that took over my body and soul. I had become so obsessed with penning down my thoughts that the idea of taking a break had begun creating a sense of FOMO (fear of missing out) in me. Knowing that NaNoWriMo was going to keep me occupied in November, I knew I had to deal with the issue immediately.

For the next two weeks, I consciously stopped myself from writing like a possessed soul. If I had ideas, I jotted them down in a notebook with a promise to return to them later. I logged out of all social media platforms. It was okay to stay disconnected for a while. All I did was read and re-read books that I grew up with and explored life beyond my writing desk with my three years old. 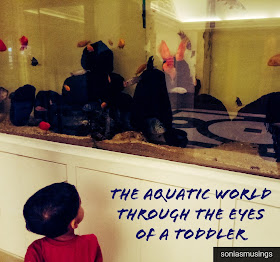 It is amazing how beautiful the world can be when one looks at it through the wonderstruck eyes of a child. The final outcome was that I participated in NaNoWriMo this month with a rejuvenated heart and mind.

Over the last one and half months, I have realized how important it is to make an effort to consciously take a break, especially when in the profession of being a self-employed individual, a solopreneur or an entrepreneur. Here are the five things that I have discovered and imbibed in me about mindful break -

Listen to the needs of your mind and body - Mindful break doesn't just mean that long vacation that you have promised yourself only after achieving a milestone. It is a process of consciously switching off as need be.

There's more to life than your profession - As a solopreneur in the field of writing, I have been quite comfortable with the fact that this is a lonely job. But it is extremely important to ensure that we have a few people in our core circle who we can reach out to. So, take that break and make some time for them to let them know that they matter.

Sustainability is the aim- At a certain point, we are all juggling with various things in life. When it starts taking a toll on our health, it is a realistic thing to step back and assess how important each of these items is. Letting go of a few to make time for ourselves might be the logical way to deal with it.

Build up hobbies beyond your profession - Until recently, I always said that reading was my favorite hobby. I love to travel as well but that is not something that happens on a daily basis. But of late I have realized that there are things that I might like beyond my chosen area of work. That is how I developed a liking towards watching stand up comedy shows.

Nurture your soul - Meditation and exercise are few things that bring a positive change in the body. Music and reading bring about a feel-good factor to the mind. Keep a few minutes aside daily for activities that have a positive impact on both mind and body. A mindful break always helps in calming down and let's the brain get back on track.

For me, the process of slowing down gave me the right amount of energy and motivation to finish NaNoWriMo. Even during this month, I traveled to Mumbai on a short vacation with family and decided to refrain from writing until I returned back to Kolkata. The choice of taking a break with consciously enjoying my surroundings and its happenings have taught me the biggest lesson of how to compartmentalize and prioritize life for a long-term sustainable vision of the future.

So, step back from whatever you are doing today and ask yourself, when have I last taken a mindful break? Now might be the best time to embark on this journey.