What Happens When You Are an Obscure Superhero?

Today’s Challenge Participate Feature is master Mark Means from Left and Write! His theme for the Challenge was super in more ways than one.

What made you decide on the theme of obscure superheroes?

When I was trying to come up with themes the first thing I thought of was 'would I be able to come up with things that started with X,Y, and Z'. Also known as my "X,Y,Z Question". After discarding a few other themes, such as a "Back to the Future" theme and an old t.v. show theme, one of my other loves popped into my head.....old comic books. I asked the "X,Y,Z" question and found that, yes, I could probably do this theme.

Believe it, or not, the letter "R" gave me the most trouble. With most of the other letters, a name just sprang to mind. This one had me doing a bit of research until I came up with "Razorback".

I think "H"....for The Human Fly. It was fun to reminisce about a character I hadn't thought of, literally, in years.

You had a mix of DC and Marvel – care to take a side?

Hmmm....that's a toughie. Back when I first got into comics, I was a huge Marvel fan. In fact, I think one of my very first superhero books was Captain America. If you asked me back then, I would have said Marvel, for sure. Recently, though, I'd have to go with D.C.....even through their sort of cruddy "New 52" stuff. I just feel the D.C Universe is more "heroic" and, for the most part, fun. (DC rocks!) 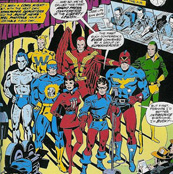 You said you were a fan of team comics. (So am I.) Tell us about The Liberty Legion.

Back when I first started buying comics, I was drawn to the team books and, besides The Avengers, another way to get my Captain America fix was in the pages of The Invaders. So, in one issue they featured a brand new group of heroes that was brought together after The Invaders had been captured by the Red Skull (I think it was), called The Liberty Legion. I didn't know it, at the time, but the LL was made up of actual characters from the Golden Age of comic books. Back then, I had thought they were just made up for that issue and, since this was in the "B.I" (Before Internet) days, what did I know? Anyway, the characters really appealed to me and I always wished they had gotten a series of their own but, alas, it wasn't in the cards and the Legion soon faded into comic book history.....again. It was neat, though, to see a few of the characters pop up years later as they guest-starred in other titles.

Who is your favorite superhero?

Definitely, Captain America.....though Batman is a close second. I've always liked the 'man out of time' aspect about Steve Rogers and how he sticks to his principles, even in the face of being unpopular. That resolve is a lot of what makes him a hero.

Which obscure superhero deserves his (or hers) own movie?

I think there are quite a few obscure heroes that could carry their own movie (if done correctly). Booster Gold and Zatanna are two characters that immediately spring to mind. A Booster Gold film could even get away with being on the comedic side and not take itself too seriously, as some of these sort of movies have been done in the past. Zatanna, on the other hand, would lend itself to a more darker tone, perhaps. Regardless though, I'd pay money to see either on the silver screen.

If you participate in the Challenge next year, what theme do you think you’ll tackle?

I'm still thinking of that "Back To The Future" theme or, maybe, something "old school" pro wrestling related. If all else fails, I think I could get by with an 'obscure t.v. show or character' theme. It's a pretty good bet that, if it's 'old and obscure', I could probably make it work.

Old and obscure sounds cool to me, Mark! Thanks again, Mr. Obscure Superhero.