Time to sign up! April is right around the bend. 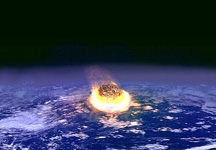 I enjoyed getting a peak behind the disaster series. Great job!

Great interview Alex, Chrys post were certainly an unusual but most interesting theme.
Enjoyed learning all about the different diasters.
Yvonne.

Was an awesome theme of disasters.

You're welcome, Alex! And thank you so much for interviewing me about my theme! :)

I'm glad you enjoyed it, Barbara!

Very cool theme! Hurricanes are big for Floridians for sure. Oil spills seemed to be out of control and I still don't think there's a good solution to the overall problem.

I like the A-Z Feature idea. That sounds cool!

Excellent interview!
It was a great theme!

Hi Chrys! I just went through and read all of your Disaster posts as part of my A to Z Road Trip. I enjoyed all the fascinating facts and learned quite a bit, particularly about cyclones, dust storms, quasars, and limnic eruptions. The fact about Linda Hamilton's twin sister was interesting, too. The only disasters I've experienced are thunderstorms and ice storms. The ice storms were terrible with all the power outages and dangerous driving conditions. I have a long steep driveway that looked like a waterfall of ice. The ice was so thick I literally had to use boiling water to get the ice off my steps just to get out my front door. I don't think I left my house for three days. The disaster that would scare me the most would be nuclear war. All of humanity and the earth itself could be destroyed in a matter of minutes. With the nuclear proliferation, political instability, and terrorism in the world today, it's a very real possibility.

Great interview, Chrys! I did enjoy your A/Z disaster theme this past April. It does sadden me about the potential you might not do 2016 A/Z but I truly understand it. It can be overwhelming and a bit taxing indeed! Do look forward to continuing to read your blog with whatever you may write there.

What an interesting theme! Chrys, I'm going to go back and read your posts.

She had some disasters featured that made me shake in me booties! Not to be confused with the phrase, "shake my bootie."

They have a lot of solutions for oil spills, but you're right...there isn't one that's good enough to fix the problem.

I had a lot of fun with this theme. Ivan was a doozy of a storm.

I've never experienced an ice storm and I don't think I'd want to. My body can't even handle the really cold days here in Florida. lol Your driveway looking like a waterfall of ice would've made a good picture. Did you take any?

I did two years in a row and I really feel like I should take a blogging break next April. And then come in swinging for A/z 2017. ;)

Thank you so much, Claire! I hope you enjoy them. :)

Haha! A few made me shake in my booties too.

Chrys,
It was interesting to read about all the disasters. I loved your A-Z theme and will be sad to see you not participate next year. Especially since you were the one that introduced me to the group.

I like that you've made natural disasters "crime scenes". Fitting. Those were interesting themes.

Her blog was one of my favorites this year!

I was happy to discover and read some your posts. All were well written. One of this year's best in the A-Z!

I really enjoyed these disaster posts Chrys. They were so accurate, interesting and scary.

I do have some photos of ice all over everything, but I don't know if I have the driveway in them or not. I'll have to go back and look.

I enjoyed her theme. It was amazing and informative!
Scary too-----

Interesting interview. I'll have to check out your series! I know all about that Gulf Spill and hurricanes. Hurricane Andrew is one of the most memorable for me.

I really enjoyed your theme this year. I'm sorry to hear you might not participate next year, but the abbreviated, unofficial A to Z posts will still be appreciated. One of my friends in the writing blogosphere also does something like that, doing A to Z topics over several months every year.

I know. I'm a bit bummed myself, but it would be a good time to take my first blogging break...ever.

Thank you so much for saying that S.L.! :D

That is a wonderful compliment. Thank you so much, Sharon!

Hurricane Andrew was a beast!

I'm glad you like the idea of my A to Z posts through out the year. I may continue to do it other years as well...even if I do the real A to Z Challenge. :)

I'm glad you like the idea of my A to Z posts through out the year. I may continue to do it other years as well...even if I do the real A to Z Challenge. :)