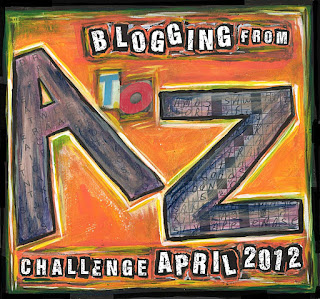 The official Blogging from A to Z April Challenge of 2012 badge is now available.  Our A to Z artist--the aptly named Ada Z, which is short for Ada Zdanowicz--worked long and hard to come up with this finalized version.

The smaller badge version actually doesn't do the artwork justice as you miss the crossword puzzle motif in the letters and some of the nuances of color.  When you click on the image to enlarge it you can see what I mean.

If there is enough interest, Ada may make poster size images of the badge available at a later date.  An alternative option might be to make numbered and signed limited edition prints.  But first she will see if she would have enough takers to make it feasible for her to do so.  Perhaps you can express your thoughts in the comment section.

She is also considering some other possible A to Z artwork goodies such as mugs or T-shirts.  Tell Ada what sorts of A to Z items you might like to see.   Ada is a young artist who would appreciate any support she can get.   You can visit her at CollagePodge.com.

Last week we put out a call for your Reflections posts or new guest posts about the Challenge.  As we would have expected from our great bloggers out there, the response was overwhelming.  Many of you stepped forward to answer our call and every date until January 6th has been filled, except for December 24th and 25th.   If anyone wants to do a special Christmas post for either of those days we'll gladly accept it, but we're very happy with the content we'll have over the next month.

Starting next week on Monday December 12th--The Friends of the Alphabet will be here in force to speak out about Blogging from A to Z.   This is the opportunity for those who want to know more about the Challenge to hear first hand what others have to say about it.  Join us to reminisce about the 2011 Challenge and get ready for the Challenge of 2012.  April will be here before you know it!

And since there were so many of you who were willing to help out with a post during our preseason kick-off prior to the A to Z sign-ups, We have decided to continue to accept more special guest posts beyond January 6th if anyone else wants to contribute something.

We'll reprint your Reflections from last year or we'll post something brand new.  We have a number of posts that were written especially for the upcoming campaign.  One you won't want to miss is the special Christmas A to Z post that appears on Tuesday December 13th that comes courtesy of Hilary Melton-Butcher , done in that unmistakable style of her usual blog posts--it's great fun.

That's just a preview of what's to come.  Just about everything anyone would want to know about the Blogging from A to Z April Challenge will be found over the next four or more weeks.  There are plenty of tips on what to do to make the Challenge better.   In fact, much of the information you'll find can be helpful in everyday blogging and not just Challenge blogging.

Perhaps more importantly these guest posts will help those who did not participate in the previous Challenge to know what it's all about.  We encourage all of you to mention this blog series on your blogs, as well as any social media sites such as Twitter, Facebook, and so on.  Get the word out.  Blogging from A to Z classes start next week and there's a lot to be learned.

Also, if you're looking for something to write a blog post about, you can always blog about the A to Z Challenge.  Many of you have done so already.  Thank you, Susan Kane at thecontemplativecat for a great post on November 22nd.

Excitement is building as we look forward to the Blogging from A to Z April Challenge.  Check this blog daily starting next Monday December 12 to show your fellow bloggers support for their posts.  Tell others about this campaign.  And let us know if you'd like to be included with a guest spot in January--there are several days available for that .

Thanks to all of you for your support!

Email ThisBlogThis!Share to TwitterShare to FacebookShare to Pinterest
Labels: Ada Zdanowicz, Blogging from A to Z April Challenge, CollagePodge.com, Friends of the Alphabet, Susan Kane

It's great that there's a dedicated blog for the Challenge - plus plenty of posts to share the details...and excitement. Thanks for your hard work, Lee! I'm putting the badge up on my sidebar shortly with a link to this page :-))

This will be my first time participating and I'm wondering if there are any "rules" or guidelines listed somewhere of what we're actually supposed to do. :) I'm looking forward to learning all about it.

Oh, and I love the badge - it's going up on my sidebar!

See, that will teach me to look around the blog before I ask my question. How did I miss "What is Blogging from A to Z" right there at the top?! Doh! I think I need more coffee. :)

Gorgeous badge. Well done, Ada Z! How did you find someone with the perfect name? I'd like to contribute something in January or February to encourage people to rise to the challenge. I have some ideas on images of the letters.

Wow, it's beautiful. Kudos to Ada Z and to you, Lee, for this idea that seems to have developed a life of its own.
Karen

I love the artwork. Great job!

I'm looking forward to learning about the A to Z challenge. This will be the first year I participate and I'm exciting to join the challenge.

Li -- I'm trying to get the copy and paste code for the badge, but still having problems getting it right. Your method should work just fine. Thank you.

Madeline -- I'm glad you found the tab. I've now highlighted it to make it stand out more. Thanks for bringing it to my attention.

Mary -- It almost sounds like a name made up for the Challenge, but that's really her name. If I don't hear from you otherwise I'll send send you an email if your address is on your site somewhere.

Karen -- Thank you from me and on behalf of Ada. The bloggers put the life into this and it's pretty cool.

Michelle -- Follow the posts in the coming weeks and meet some great bloggers who have so much to say about Blogging from A to Z.

Hi Lee, I am working on something "extra" for this... I could post it December 24th or 25th...
I will email you details asap.
Ron
(PS how do you put your link here?)

Wishing I could have participated in guest posts but silly me had a blog change :)
I am looking forward to reading them all though.
Badge is up on the blog and I am excited to think, April isn't too far away!

Thanks for the offer, I don't quite think I am cut out for a guest post though. I participated this year with 2 blogs (my regular and my cooking blog) and I had a great time. Unfortunately I lost my final A-Z post when I deleted the blog, it had the gist of my thoughts on it all :(

My everyday "regular" blog is this one,
http://blogwobble.blogspot.com/

My cooking one is more like my own personal cook book.
Thanks for stopping by.

Will get new badge up!

New badge is already up, looking proud, Have finished my A to Z for April.

That badge is fabulous.
I'm really looking forward to the guest posts. I didn't do this last year so it will be good to find out more :-)

Thank you everyone! I'm happy that you all like the badge!

Wonderful A to Z Banner, Ada! I've added it as a teaser to my site!

Great post Lee - it is exciting to see all the energy around the upcoming Challenge. I'm dropping by the blogs mentioned in this post and showing my support!

If I’m going to leave someone else’s blog address at the end of my comment, I should at least say whose it is, right?

Well...I added Hilary’s blog address (she’s my recent discovery through you, Lee) without realizing it!

But, dare I hope those that ventured over to visit were as tickled as I was! Hilary has a great site and I loved her post on Tea Bags...and the bit about The Hotel in Hamburg!

Thanks to all for the support. Jenny, the badge looks great on your site and I agree about Hilary's wonderful blog posts--so much detail and information.

Yay for the new badge! I love the crossword motif in the letters. Good job, Ada!

Can't wait to see the posts. I mentioned the upcoming A to Z this past week, but hadn't seen the new badge yet. Will get that up right away!

Hi Lee .. thanks so much for the plug - I'll be interested to see everyone's comments now!

Your A - Z Challenge has become a wonderful camaraderie of bloggers with that added extra of being able to meet them all - or as many as we wish.

I agree - Ada's badge is incredible and now I can see the cross-word superimposed .. that's a great addition - Ada seems to have one great talent and I hope the A - Z Challenge will help her with many other projects from fellow bloggers. I must get it across and onto my blog ..

Jenny - thank you so much for linking across to my site - I saw your first comment and thought to myself -that's my blog .. what's up! Ok the wheels of the brain clicked in ...

Cheers to you Lee - you are amazing in your support, ideas et al and to finding Ada - great addition to your team .. see you Tuesday .. Hilary

Thanks Shannon! Thanks Hilary! I really appreciate all of the nice comments.

Oh wow! I love the new artwork!! Looks fantastic. I'll get that up on my blog as soon as I can.

The badge is simply gorgeous... can see the lovely detailed artwork on the enlarged image!!
Wow... I'm excited about the April challenge!

If you still have a slot available, I'd love to do up something :)

I have been absent because I had to change computers and of course lost all my favorites. Arlee stopped by my blog and left this link.
How do I sign up for Dec 24, 25 and what do I need to do? I have nothing going on for Christmas (pathetic, isn't it?) so would be glad to help,as soon as I understand with what!