Choose Your Own Apocalypse


Perhaps you've heard, or maybe not, but the world is ending Friday, December 21, 2012, or so say the Mayans (or at least the people who have decided this is what the Mayans had to say).  What better way to ring in the end of the world than with a blog fest?  Join Shannon, of The Warrior Muse, and Chuck, of Apocalypse Now, for the Choose Your Own Apocalypse Blog Fest, Friday, December 21, 2012. 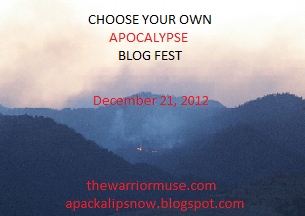 Assuming the world doesn't end until later in the day, it should be quite the party!

You see, while many people think the world really is going to end on Friday, the 21st, most of them can't agree on HOW.  Will it be an alien invasion?  Zombies? Collision with a mighty meteor?  The super flu?  Solar flares?  Oh my, there are so many ways the world could conceivably end, but the question is, what do YOU think will happen?

Visit one of the following blogs to sign up:

I have been discussing this in my blog for a while now and after many comments and looking at all the evidence we have come to a conclusion as a group that; this is something of a surprise, but as this is a subject I have been studying for a while now I feel I am now quite an authority on the matter. And over the part few weeks I have been able to add photographic evidence as proof too

So I'm sure you are all keen to know what an expert on this has to say as everything else is shear speculation and madness.

The World will end on the 21st Dec with the arrival of huge intergalactic cheese slices sent by aliens, these will be followed by a flock of Space Gulls and finally it will all end when the aliens themselves turn up and we all vanish in a sort of instant vanishing sort of way. Assuming that you have not been crushed by the cheese slices or eaten by space gulls first.

But as I have already discussed in my own blog there is also a margin of error to take into account with the actual date and it appears the margin of error is up to 300 years and 21 days so it may may not end on the 21st but mark my words it will at some point just keep watching out for huge cheese slices.

i am in, but laying really low... hiding from the zombies... you know they are knocking at the door.

No self-promoting by this famous dog. My human will be calling the good folks of Tonga to find out if the world ends on December 21. I will then let the rest of you know.

I'll be doing what Jeremy is doing. We're still well stocked with rice and beans from Y2K. Kidding. But if you want to see the folks who aren't, they're called Doomsday Preppers and they are hysterical. Midnight gas mask training for all those under 7! Seriously. They do that.
Tina @ Life is Good
http://kmdlifeisgood.blogspot.com/

But surely, Tina, the apocalypse will have to do with whoever reaches the date of December 21, first. That way, the people of Tonga can inform us if the world ends :)

Rob could be close but I was going with Flock of Seagulls...retro 80'sa music and CHEESE!!!

Since this pseudo-Mayan-prophecy jazz is going down on my birthday (leave it to me to usher in the apocalypse). I reckon all y'all should be ok till about 10:41am (the time I was born on Dec. 21, 1970). What'll I be doing? Let me eat cake!
Some Dark Romantic

Can't wait for this one! Assuming we all survive, that is ;)

Personally I don't believe in these statements, but I expect one time I will be proved wrong.

Have you not been paying attention? Have the zombie fanatics not been telling you to get your zombie survival kits ready? Bring it, Mayans!

Alex, thank you for the mention!

Rob, no, no, you're supposed to save that for Friday! Cheese slices, hmmm? The lactose intolerant shall go first.

Jeremy, be sure to be armed. You never know if they're the fast or the slow sort.

Klahanie, definitely let us know what they say, yikes! And if there is no answer, do we assume the worst?

Tina, isn't there a show? I need to check that show out. I'm betting it has been tons of fun leading up to this big one.

Mina, perhaps it will be a cake apocalypse? Too much flour! Happy Birthday in advance in case I don't get a chance to say it on Friday.

Jamie, as long as there is internet, I can withstand the hordes!

Yvonne, it's all in good fun!

Jolie, indeed! I wanted one of those zombie weaponry kits they put out for The Walking Dead. I did, in fact, get one of the weapons for my dad, a lethal little number. So he is covered, anyway.

After Thursday ends, it is natural for Friday to arrive and by midnight Friday is the only thing that would end, and certainly not this beautiful world. I can't understand from where people come up with such bizarre predictions, and also I can't understand, that there are many people who believe in such nonsense.

This is great! I just signed up and I think I'm going to have lots of fun with this one!
A2Z Mommy and What’s In Between

Rama, while there are people who do believe, fully and truly, I think the majority of us just like to have a little fun with the idea.

Tracy, I'm so glad you joined us!