Themes That Rocked – Traveling the Globe with Photographer and Explorer, Yusuf Hashim

Hank Kaykuala is an accomplished poet and author.
During the Challenge, he highlighted some of his amazing poetry.
But part of his theme included highlighting the travels and explorations of his friend, Hank Kaykuala.
It was fascinating!

Part of your theme for the Challenge was This is the Modern Day Explorer – why did you choose to highlight Yusuf Hashim?

Yusuf is unique for two reasons:

Firstly, Yusuf Hashim is a Gypsetter, and an accomplished photographer. His photos are not only technically and visually fantastic, but the stuff that he shoots are mainly from locations that many of us usually only dream about. Often-times, Yusuf accesses these locations usually by directly driving his 4x4 go-anywhere Toyota Land Cruiser. Yusuf drives his vehicle across continents for photography as regularly as we fly from continent to continent. He’s driven overland from London to Malaysia not once but several times. He’s driven from Malaysia through China and over the Himalayas to India. He’s driven from Cape Town to Cairo, and from Cairo across the Sahara Desert to Casablanca. He’s driven right around South America from from Buenos Aires going north to Uruguay, Brazil,Paraguay, Bolivia, Peru , Chile, Argentina and round Ushuaia in Terry del Fuego and finished by reentering Buenos Aires from the Sourh. His idea of fun is to sail in a schooner in the Scoresby Sound of Greenland. And when he wants a photo of an active Volcano, for example, Mt Erta Ale’ which is Africa’s most active volcano, he actually climbed it and camped overnight on its crater rim above the boiling lava below. He jumped the bungee over Victoria Falls on his 65th Birthday. And last week, (May 18, 2015) he’s just celebrated his 70th birthday in the Todra Gorge of the Atlas Mountains of Morocco.

And secondly, not many people are aware that Yusuf retired 15 years ago, as Retail Marketing Director of Shell in Malaysia. After a sterling Jet-setting Corporate career in one of the world’s largest Oil Company, he metamorphosed into a Gyp-setting accomplished Photographer after retirement.

What is the Vacation of a Lifetime?

Yusuf’s idea of a vacation is ….getting hot by climbing 4 active Volcanoes in two weeks - 2 in Java in the first week (Mt Ijen and Mt Bromo) and another 2 in Africa (Mt Erta Ale’ and Mt Dalol in the Danakil Depression of Ethiopia) in the second week. The night time temperatures in the Danakil Depression is a searing 48°C. And to wind down and cool down in the third week …. flying to Iceland to shoot the Aurora Borealis in the -15°C Lake Myvatn Volcanic Region in Central Iceland. And perhaps sailing in the Scoresby Sound of Greenland after that.

Have you gone exploring with Yusuf in the past?

No, perhaps one day.

You posted some of Yusuf’s incredible photos. Which ones were your favorite?

All of them are great as they were snapped not only with the heart but ably accomplished with his technical skills. I will choose those which are rarely possible and difficult to come by (like the boy with the AK47, the passenger peering out the train window) and opportunistic ones (like the family going for the shared community bath where the elder girl had a toothbrush in her hands) A few are included here including the boy with the AK47. These are of a high resolution format.

Yusuf has taken people all over the world on photo safaris. What countries seem to be his favorite?

The flavor of 2014 was AFRICA – specifically Ethiopia. Last year Yusuf did 3 photo safaris covering the entire length and breadth of Ethiopia, which Yusuf says is the unpolished jewel of Africa. After decades of civil strife and political instability following the removal of Emperor Haile Selassie, Ethiopia has recently become safe to visit . Ethiopia has more than 50 Ethnic tribes who are living much like their ancestors did hundreds of years ago.. Yusuf’s photos chronicling the little known tribes of Africa, are like pages out of a National Geographic Magazine. 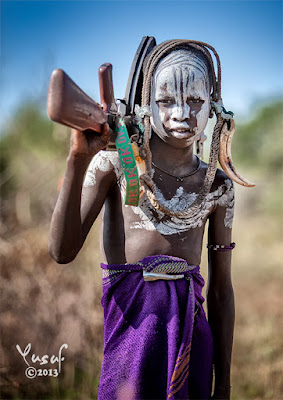 Yusuf Hashim says:
This is a Mursi boy, who couldn't be more than 12 years old, with an AK47 Kalashnikov on his shoulder. He demanded money when I shot this photo of him. I didn't want to argue with that globally acclaimed widow-maker, so I gave him 20 Birrs for this photo. That's equivalent to about 50 cents.

The flavor for this year seems to be Cuba, Iceland and Greenland. Yusuf took three groups of people to Cuba earlier this year. He says you must visit Cuba before Cuba warms up to the American tourists, and everything is spoiled by modernization. Cuba is like a state frozen in time, with delightful Spanish period buildings around every corner. Cubans are still very warm to tourists.The foreseen influx of American tourists in the near future, will probably transform Cuba into the usual tourist traps like in Egypt and China and Morocco. Then he took two groups to the freezing permanent Icecaps, glaciers and waterfalls of South Iceland, followed by North and Central Volcanic Region of the Island. In September this year (2015) he’s returning to Iceland which will be the appetizer for a Sailing Expedition in Greenland. 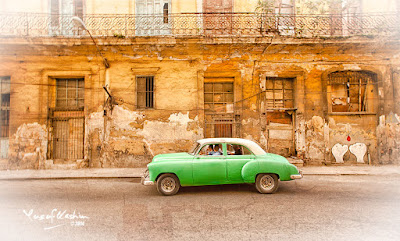 Tell us about the loneliest road Yusuf has ever traveled.

Yusuf told me the loneliest road in the world has to be the Routa 40 about 3000 kilometers from Patagonia to Ushuaia alongside the foothills of the Andes, across the Glacial Wilderness of the Glacial parks of Southern Chile and Argentina, with the Tres Torres and Mt Fitzroy on one side and Mt Aconcagua on the other, and leading to Ushuaia, the southern-most point of South America. When he drove around South America along this route, for days he saw only 5 or 10 vehicles apart from his convoy of 15 vehicles. Yusuf says, Patagonia is one of the places you must go to before you go to meet your maker. Here’s a sample of the photo opportunities in Patagonia…

Yusuf Hashim says:
Ruta 40, or Route 40 in Argentina, reputedly the loneliest road in the world. For nearly 2000 km, I counted less than 50 other vehicles on this god-forsaken track running alongside the Andes from la Puna until reaching the Glaciers of Patagonia

Where can we find out more about Yusuf?

Yusuf is presently rebuilding a new personal web page, so for more current information, check out his Facebook page or his Photo Safari Website.

Thanks, Hank! And I hope you get to join Yusuf on an adventure soon.

What an absolutely wonderful life this man lives. I wish I had to get up and go to do what he does. I love the idea of driving everywhere although I assume he uses a boat to ferry his vehicle in some areas!! I will definitely check out Hanks A to Z posts. Thanks Alex.

Thanks a lot Alex for the shout out! Hank is overwhelmed. Got to thank Yusuf too! Kindly make the following correction.
1. line #4 ."...explorations of his friend, Yusuf Hashim...(delete Hank Kaykuala and substitute Yusuf Hashim) Thanks!

Wow, to be his assistant would be a dream job. He wouldn't have to pay me. Just let me ride along in the vehicle. Thanks for introducing his work.

Incredible!! What a lifestyle. The pictures are incredible. Thank you for the introduction.

You are most welcomed Jo! For starters this is one of the later ones:

I can't imagine having that lifestyle though it sounds very exciting. And expensive. Driving around South America would be an adventure of a lifetime.

Incredible is sure the word for it, but I'll skip the volcano climbing lol

I love photography and the stories that come about from the photograph. Nice work.

Hi Hank and Yusuf - incredible stories and those shots - Ethiopia must be amazing ... Victoria Falls is an incredible bridge ... and that part of the world is just beautiful. Love Africa ... cheers and I'll be around to visit once the Autumn arrives and I'm blogging again .. cheers Hilary

Hi Mr. Yousuf
Thanks a lot for your amazing blog posting. I very interested in your site and hope logged executive assistant cover letter .

I have nominated you CLEMachkenzie for "The Creative Blogging Award"
Please read my post on the said subject for rules.
Yvonne.

Hi, I’m a hobbyist photographer and I have joined the Photo Safaris that was organized by Yusuf Hashim and with his friend Chan Maxby on the Old Silk Road in China; Kashmir in India; Nepal Trekking to Tengboche near to Mt. Everest and I can surely say he is a humble amazing person who love to share his knowledge on photography and his lifetime travel experience.