Brief description:
Twenty-six perspectives collide to present a portrait of an epic showdown between good and evil as the world of Zala proves to be the last stand of the Sapo Order. The human who would become known as Ulysses appears and deposes the tyrant Reeve, but things only get worse from there... Soon, everything is lost, and blame is pinned on Sapo warrior Zuri. The truth is lost to history, Ulysses becomes legend, returns home to Earth, and finds that his family is a new kind of battleground. His son doesn't believe his stories, his daughter does, and his wife may have reached her emotional limit waiting all those years for his return. Time passes, and in space a scavenger named Drexel discovers the android Kindly, who may hold the key to unlocking the truth about what happened on Zala. Twenty-six perspectives, and one big mystery: Who is Kindly? The truth will astonish you! 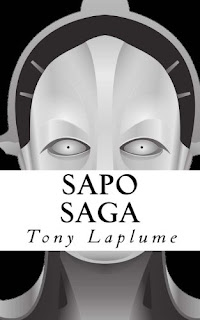 Why did you take part in the A to Z Challenge the year that your book was "given life"?

I'd been participating for the four years previous and thought this would be an interesting way to do so again, as a serialized story.

Why did you start blogging?

Back in yon olden days before social media exploded, blogging was a natural extension of internet message boards that helped you establish an identity for yourself if, say, you happened to be an introvert and found it difficult to do so in the real world.

What other books do you have available?

Where did the idea for this book come from, other than the alphabet and the challenge?

Some comic book scripts I'd written and subsequently repurposed.

What writing goal do you hope to accomplish this year?

I have a lot of projects I'm either working on already or would like to start.

I’m rolling my eyes because Dad’s telling one of his…tall tales again. Ophelia’s loving every minute of it, as usual. Maybe it’s because Dad’s actually kind of a good storyteller. He really throws himself into it. Maybe it’s because Ophelia’s too young to know better. Maybe it’s because I’m too old. Maybe it’s because I just wish…I remember when he wasn’t around. Ophelia doesn’t. She was a baby. She doesn’t remember how horrible it was for him to be absent. She didn’t spend every minute of it wishing he was there. She didn’t build up resentment. I wish I could just let them be stories. The biggest problem is that even if they’re just stories for Ophelia, I know that Dad’s convinced they really happened. I mean, he really believes he went into space and became a hero on some distant alien world. When Mom’s not careful, when she doesn’t care enough, she says things like, “Well, your dad used to be a drinker,” things I can understand, but Ophelia can’t, because she hero worships him. He’s everything a little girl would adore, because she only sees the surface, and all I see are the lies. Maybe out in space, there really are aliens who, I don’t know, pick up the vibes of his obnoxious fantasies or something, and he really is a hero. Maybe things work like that. Maybe I’m wrong. Maybe those aliens exist, who know Dad the way I never did. Maybe the resentment means I won’t let myself believe. Maybe there’s some, I don’t know, black alphabet out there that sets the record straight. And maybe someone will one day discover it.

As a reader, what most motivates you to buy a new book to read?

What is one question or discussion topic which you would like the readers of this post to answer or remark on in the blog comments?

How often to you consider that everyone has a unique perspective on something, and that they are going to be right, even if those perspectives disagree?

Link to buy the book: Amazon


Find this author at:

Time to HOP over to today's stop: 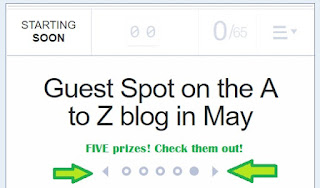 There are FIVE prizes up for grabs on the Rafflecopter.
http://www.rafflecopter.com/rafl/display/4fa90ac733
You have all month to complete as many options as you choose.


Keep coming back to the A to Z blog every weekday this month so you don't miss any of the First Annual #AtoZChallenge Book Reviews, Tour, and Blog Hop!
Posted by J Lenni Dorner at 12:00 AM

Thanks for putting on this tour and spotlighting my book.