With the rise of crowdfunding, and the increased demand for diversity and representation (especially in children's and YA literature), there have been more and more artistic projects that gathered a lot of support from readers to bring that diversity to the surface. In this post, I brought you some of my recent favorites from the world of comics and graphic novels. I think they are not only great reads, but also very interesting projects that deserve more awareness.

Moonshot: The Indigenous comics collection
The first volume of this wonderful series came out last year, following a wildly successful Kickstarter campaign. It contains a collection of stories created by indigenous writers and artists from the United States and Canada. The artwork is stunning, and the stories are amazing and diverse combining several genres, styles, and emotions. The freebies and swag that came with the Kickstarter were also very much worth having (all of my bookmarks are from them). Since as a teacher I often run into students having only the vaguest idea of contemporary indigenous cultures and art, I think it is a very important (not to mention great) project to promote.
The Kickstarer for the second volume is running right now - it is not too late to jump in!

Elements: Fire (A comics anthology by creators of color)
This is the first installment of an anthology series, created by writers and artists of color, inspired by the #WeNeedDiverseBooks movement. The Kickstarter just recently ended, and the book will be out soon! The artwork we have seen so far is gorgeous, the cast of stories and characters promises amazing diversity in themes, and the volume has an impressive lineup of creators. You can follow editor Taneka Stotts on Twitter for updates! 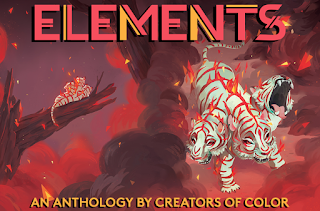 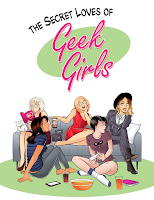 The Secret Loves of Geek Girls
Edited by Hope Nicholson (the same lady who edited Moonshot), this collection was also born with the help of Kickstarter, and contains stories about geeky love. I can honestly say that this book changed my life. There are many types of love, and many emotions contained in the stories, all presented with humor, and empathy, and great skill in artistic expression. There is also a great range of gender identities and sexualities represented; it is indeed a diverse book. Presented with pop culture references, and all things geeky.
Nicholson mentioned that there might be a "Secret Loves of Geek Boys" in the works; keep an eye on Kickstarter and her news feed!

Now this is, obviously, an incomplete and subjective selection. I encourage everyone to browse freely in the world of diverse comics and graphic novels, and let us know about YOUR favorites!