Today's guest, Hilary Melton-Butcher barely needs an introduction.  She's the prolific and terrific lady whom we admire for her uniquely told stories of history and mystery.  A visit to Positive letters...inspirational stories  is always a treat.  Today she's doubling up with two linked posts, one here, one at Life is Good.  Don't miss either one!

Art, Science, ‘Down Under’ and bloggers … Tina of Life is Good asked if I’d do a guest post for the A-Z blog and as a guest blogger on her blog … theoretically these might have been on Vikings (these will follow) – but as is the way with my eclectic brain I’ve settled on the Weedy Seadragon and the Great Australian Coast Road.

I expect many of you will have seen or heard of the BBC tv programmes ‘Coast’, where Neil Oliver, archaeologist, historian, author and broadcaster, tells us about Britain and Europe …

… he has now moved to Australia (well perhaps he’s travelled there for the programmes!) – this is where these two ideas stemmed from.

"Weedy Seadragon - taken from the sketchbook of William Buelow Gould - 1832"

Weedy Seadragon – who could ignore such a wonderful name for ‘Phyllopteryx Taeniolatus’? This amazing little seadragon and its sister, the ‘Leafy Seadragon’ are found around the shores of southern Australia. 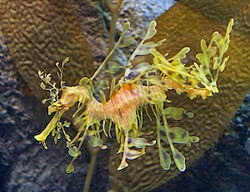 
These endangered, endemic to the south Australian coast, little ‘prehistoric monsters’ are just a delight to see and to have found. 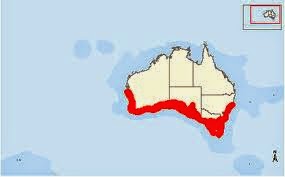 Perhaps, now I’ve looked, even more interestingly … they were drawn and painted by William Buelow Gould, a convict – who had been caught stealing a coat and then was sentenced in 1826 to “seven years beyond the seas”, a phrase indicating transportation to the then penal colony of Australia.

He had a wife and two children … but once shipped out, few convicts returned. He also didn’t change his ways … and got sentenced to the Macquarie Harbour Penal Station, one of the harshest, for forging a banknote.

The only way to the prison was by ship … but it got weather bound … and the convicts aboard mutinied with half of them taking the ship. Gould and the other convicts stuck with the officers … before setting off overland to get help.

For this Gould’s term was commuted; he was assigned as a house servant to the colonial surgeon Dr James Scott, who was also an amateur naturalist.

Scott put Gould’s artistic talents to use, having him paint watercolours of native flora – which today are regarded as being of a high technical standard.

Even now he couldn’t remain out of trouble and so was again sentenced to Macquarie Harbour, but based on his reputation he worked for another amateur natural historian, Dr William de Little on Sarah Island at the penal station.

This time he produced landscape sketches about life at the penal stations, as well as still life watercolours of botanical specimens, birds, fishes and other sea life.

Despite being granted his Certificate of Freedom in June 1835 he descended into a cycle of drunkenness, poverty and prison sentences for theft … he had remarried in 1836, but eventually died in 1853, aged 52 or thereabouts.

His sketchbooks and works are now highly acclaimed; his “Sketchbook of Fishes” being inscribed on the UNESCO Australian Memory of World Register … this is the equivalent of a World Heritage listing for historic documentary material.

It is noted that Gould sketched a number of species for the first time; and his works are recognised as being of enormous value to scientists today … and he’s even had a novel written by Richard Flanagan, published in 2001, from his Sketchbook of Fishes.

I’d better return to my little prehistoric monsters … the Weedy Seadragon and Leafy Seadragon … are marine fish related to the seahorse.

The weedy appendages provide camouflage … but don’t have the prehensile tail like the seahorse … they drift or move very slowly … not far at all.

They blend in so well to their natural surroundings … that they aren’t detected as a food source … the real threat is from us humans as when there is so much pollution in the water it makes it very difficult for them to survive … but when their natural habitat is taken away then it is a real threat for them to blend in and remain hidden.

Like seahorses the males nurture the young … the female lays them into her mate’s pouch on his abdomen … about nine weeks later they are born and have immediately to care for themselves.

The southern coast of Australia was full of prehistoric, now extinct, monsters five million years ago … the seas were 2 – 3 degrees warmer and contained life that we don’t see today …

Then these pretty little prehistoric monsters have a wonderful tale to tell – let alone the fact that we have had a record of them for about 180 years
… they probably evolved from those aquatic vertebrates now buried by this ever changing earth of ours.

I say here’s to the Weedy Seadragon and to the Leafy Seadragon … you have made me smile while I think about you both … and increased my desire to go down under!

Thanks, Hilary.  It's always so fun to learn about the people behind the books, and that back story, which wow, I would not have predicted!  Readers, time to go see about the Australian Coast!  See you at my place.