A to Z Challenge Hacks – All Text, No Extras! 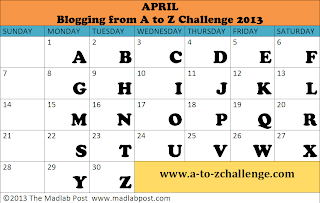 The next Blogging from A-to-Z Challenge is a few seasons away but it’s never too early to get a head start on mapping out your game plan for surviving this massive undertaking.

As we close out the Summer and head into Fall, this is a good time to learn from our own previous A-to-Z Challenge experiences or those of other participants, to keep up with the alphabet and visiting new blogs without losing our minds in the process.

Since I was fundraising for my short film at the time and didn’t have internet access during most of April, my daily schedule was hectic. There were days when I found myself scrambling to get a blog post up by 11:59pm to avoid falling behind our 26-day blogging schedule. Here is one of a few tips and tricks that helped me stay on track as best as I could during the 2013 A-to-Z Challenge.

I posted my blog posts without photos and then returned at a later time to edit/update the posts by adding photos. This is one of my A-to-Z Hacks that worked wonders for me by reducing the stress of not being able to have something new for those who were visiting my blog.

Putting text-only posts up on your blog is especially useful for procrastinators or those who just usually write their blog posts later in the evening due to jobs, screaming babies, whining spouses, ailing parents, church services, natural disasters, technical issues, NBC’s The “X-Factor” or “America’s Got Talent,” CBS’s “Big Brother,” HBO’s “Breaking Bad” or for whatever other reason.

Since I’ve written a lot of my A-to-Z Challenge posts at night, I would aim to get something up on my blog by 11:59pm for the current letter of the day. When the challenge reached Letter K, I did not have the time to write, edit, proofread, edit again and format my post earlier in the day, so I worked on it at night starting around 10:00pm and noticed that I was running out of time.

So instead of worrying about the layout of photos that would support this post, I focused on getting the post to go live before midnight, so that I could remain up to date in the challenge. Afterward, (since I wasn’t going to sleep anytime soon, anyway) I searched for the images that I wanted to accompany that post and then went back into my blog editor and added them sometime after midnight, within the next hour or so.

My Text first, Pictures, etc. later A-to-Z Hack worked so well that the same trick could be applied to posts written earlier in the daytime as well. If you are among the challenge participants who write your posts in the morning or during the early afternoon hours but still need to find photos to go with them, just split up those duties – publish the post that you have so far (which is the text) and then add the images and/or any links that you didn’t have handy the first time around, later in the evening when you get to them. See…this A to Z blogging trick is as easy as pie.

Have a joyous weekend, everybody!

*More of my A to Z Hacks will be coming soon. Until then, let me know something…

When (morning/daytime/nighttime) did YOU usually write YOUR posts for the A to Z Challenge?

Do YOU have any A-to-Z Challenge survival tricks up YOUR sleeve that you’d like to share with me?
Posted by Nicole at 12:30 PM

Having those posts roughed out at least a month before the challenge reduces A LOT of stress.

Thank you so much for this post. It will come in handy next year.

I had the end of the alphabet done because I was going on a trip, and the beginning through H done since I was a co-host, but the others I wrote either the night before, or really freakin' early before heading off for my latest medical "adventure" du jour...It was a tough month, but the Challenge kept me moving.
This is an EXCELLENT idea and will be useful for so many people. Thanks for sharing, and I look forward to more in the series.
Tina @ Life is Good

Hi Nicole - good idea for sure .. the editing (not all the time) can be done anon too - I notice mistakes and then go in and correct them ..

But this certainly makes sense for A-Zers with limited time ... and that you appear to have with babies et al ..

Curiously, that's the exact opposite of what I did.Since I only featured young adult books, I took pictures of the books first, then uploaded them into the correct day. Later I would upload some text; that way, in a pinch I at least had a pic.

If nothing else I find that deciding upon my theme well in advance gives me time for ideas to pop into my head. I will start all my posts by scheduling them with at least a letter and maybe a word. A few key words added in also help. When I have the time and inspiration I'll go back and basically just start filling in the blanks.

Tami,
I couldn't agree with you more; Advanced planning in those early months does help make the A-to-Z ride a lot smoother by the time April rolls around.

Munir,
I'm glad to know you found this post useful for your A-to-Z Challenge needs and I look forward to your participation and enjoyment of the challenge next year :)

Tina,
You had so much going on at home that I can almost picture you getting some of those posts written during the 11th-hour, like me, lol. It's good that you had a portion of the alphabet done already, which helped save you a lot of sleepless nights (or mornings). I share your use of the challenge as a motivator. It surely gave me something to look forward to during moments when I was down and out. Thanks for reading my A-to-Z tip.....I'm glad you like it.

Hilary,
It's so good to have you chime in on this! Having the main portions of a post up as soon as possible does give us time to go in and do the necessary editing and tweaks that may have had us delaying our posts. The babies, etc. were examples that I made to include possible factors that would affect a participant's schedule during the challenge; If I had babies, I'd definitely have to implement a lot of that planning and scheduling months in advance, like Tami mentioned :)

Pam,
Get out of town! I can see how you're photo-first method is very useful, especially since it can be a pain to find photos for some of the letters. You've shown how the flip side of my "hack" works too. Either way (text or photo) keeps gets main portion of the post completed so that all we have to do is go back in and add the remaining elements and we're good to go.

Arlee,
Sounds like you do your posts in steps; I'm a huge subscriber to that outlining method but haven't done it often for the challenge except for maybe to add titles and a brief description of what the post is supposed to be about. Even then, however, I usually did it on paper or in a separate word processing document, rather then inside the post editor. I want to start scheduling more posts more often for the challenge but I've rarely decided on a theme until weeks before. I've gotten to a point where I might have an idea for a theme but it changes depending on my mood.

If I can schedule at least half of the alphabet before April, that would really put me on the right track. I'm glad to see how everyone has their own different way of surviving the challenge, many methods that could be useful to the rest of us. It makes the challenge that much easier to get through all the way to letter z.

Pre-post, pre-post, pre-post! I start planning out early and write posts at least a couple of weeks in advance. Occasionally I'll have to go back and edit because real life/news stories make what I had planned seemed wrong (for example, posting on the video game Super Bomberman felt wrong and awkward after the Boston Marathon incident this year)so I had to edit. But for the most part, starting my posts and scheduling them out made April much easier and less stressful.