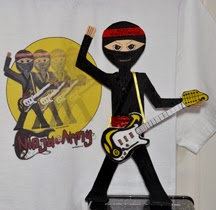 I’m to give you the inside scoop on A to Z Challenge Co-Host, Ninja Captain Alex J. Cavanaugh.

Why me? Because I’m not afraid of the spotlight. Alex likes his privacy and stays in the shadows. I guess Ninjas aren’t supposed to be seen, right?

So it’s up to me to tell you about him!

Alex started blogging over four years ago when his publisher told him to get his butt online. He participated in the very first Challenge in 2010 and has been a co-host ever since. Says that first Challenge changing his blog forever.

Alex is also the founder of the Insecure Writer’s Support Group. IWSG for short. Writers with blogs post the first Wednesday of every month. They can also join the Facebook IWSG. There’s also a IWSG Website - a database of sites and information for insecure writers. About a thousand people participate one way or another. (Writers are an insecure, squirrely bunch, aren’t they?) 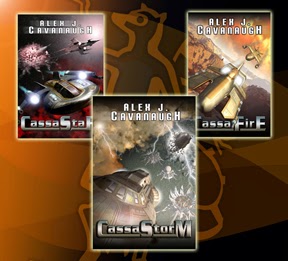 I mentioned his publisher earlier. Yeah, Alex is an author. He has a space opera trilogy - CassaStar, CassaFire, and CassaStorm. They’re all Amazon Best Sellers. (Not sure how when I’m not in any of the stories, but we’ll let that slide.) He’s working on another book now. And to think he didn’t even want to be an author! 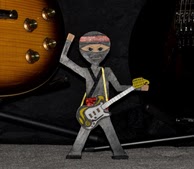 That’s probably because he’s also a musician. Alex plays guitar in a Christian rock band. He has a lot of guitars, but none are as cool as mine.

If you visit his blog, you’ll discover he likes to talk about movies, music, games, and other geek stuff. Alex also has a feature called the Ninja News where he highlights the achievements of his blogger buddies. He’d rather put the spotlight on others than himself. 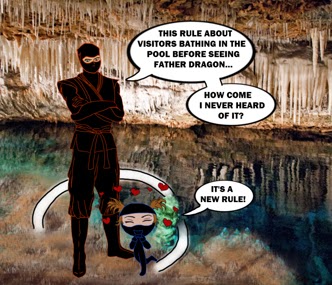 There you have it!

Now, where’s that Mini-Kate you promised?

You can find Alex: Blog, Twitter, Goodreads, Google+, and at the Insecure Writer’s Support Group.

Is there any resembalnce to Mini Ninja to the Alex we all know?
Great post Alex.
Yvonne.

Alex, you rock, my fine friend!!

Bizarrely, I had a dream two days ago. You lived next door to me. I never saw you, I just knew it was your house. It was as if a celebrity lived next door...!
You had a bunch of signs outside your house. Those sort of interchangeable word signs you see in the south.
My conclusion is that to me it must be that your blog, in many ways is as sloppy and nearly as demented looking as mine. Please do not be offended.
The good part was that most of the signs had to do with announcing that you are being very busy writing! :)
Keep up the good work! jean

Thanks, Mini-Alex! That was very well done. Alex is a good friend of mine, and you let all the folks learn about his work and accomplishments. What you DIDN'T do is show us a non-shadowy picture...but alas, Ninja Captain himself only gives those out for prizes. So would you please make him do another contest, and then rig it so I win, and I promise that I won't show it to anyone else? Thanks, buddy.
Tina @ Life is Good
A to Z Team @ Blogging From A to Z April Challenge 2014

I do hope you keep him under control when you're all home safe and sound, but no doubt Alex' wife does a pretty good job ...

... and hey - we didn't hear about those clones ... please enlighten us - cheers Hilary

Jean, not offended at all! Maybe I'm the neighbor Wilson from Tool Time.

Tina, will think about it...

Hilary, she does indeed do a good job.

Mini Alex is very durable. I've seen him in lots of setting. He enjoys the spotlight more than real Alex.

Mini Alex, I'd get you a mini Kate, but well my cut and paste abilities just aren't up to art perfection.

You rock, Mini-Alex. And I hope you get your Mini-Kate soon!

Mini-Kate? Seems mini-Alex has more in common with Capt'n Alex than we might have thought. . .
An excellent post and introduction (perhaps you should take care of Alex's PR from now on, Mini-Alex!)

I'll see what I can do about a Mini-Kate.

DG, Mini-Alex can do all my promotional work from now on.

Alex and Mini-Alex in one post? Fantastic. There should be a Mini-Kate.

I think Alex and my hubby would get along very well when it came to how many guitars they need. (AKA A LOT)

Thanks for the scoop, Mini Alex. ;)

Do you know what S.A.M stands for, Mini Alex? Stubborn As a Mule. That means Ninja Muse don't give up or loose hope easily. One Alex is married, so what? There are hundreds of Alex left!!! That's the cool thing about a man who owns the original cloning machine. By the way, how tall are you?

That was a lot of fun! Thanks, Mini-Alex!

I loved getting the scoop from Mini Alex. My husband & sons are all guitar players, and the Christian band is just a big ol' bonus.

I'm getting more excited for the challenge as each day goes by!

Mini-Alex what Tina said above, lol.

Alex is gonna rock another #atozchallenge with all of us!

Patricia, you can never have too many guitars.

Lynda, a blessing of a bonus!

Hahaha, that was so fine, my mini Alex. I think you do deserve a mini Kate. Maybe he'll surprise you one day. Maybe. :-)

I thank the blogging world for Alex and the other co-hosts of A to Z past and present.

Lee
An A to Z Co-Host
Tossing It Out

Great post, Mini-Alex! It filled in a few blanks for me. Have a good one!

Thanks everyone - Mini-Alex did good.