Diana Gordon at Part Time Monster went with the theme of lady monsters!

Your theme was Lady Monsters – was it an obvious choice given that your blog is called Part Time Monster?

Writing about female monsters seemed like the obvious choice once I thought of the idea to use Lady Monsters as the A to Z theme, yes. I actually hadn't written much monster-themed content before the challenge. But I do focus a lot of my writing on girls and women. I decided to marry that with my interest in monsters. There are a lot of female monsters who don't get much press time, and it seemed worthwhile to start talking about them, and to talk about them not just as monsters but as women, too. 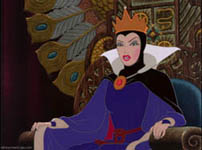 Which Lady Monster was your favorite?

I think my favorite to write about was Queen Grimhilde, the Evil Queen from Disney's Snow White. She's iconic. It was quite an experience to write about a villain that has terrified me since childhood.

I didn't have a difficult time with any of them, oddly enough---but I suppose that the problem with this theme was that there were so very many possibilities to choose from, and only 26 could make the cut. There are a lot of fascinating monsters out there. I didn't really set parameters for where I'd pull from---so there are movie, TV, and comics characters plus mythological monsters from several different cosmologies just in those 26 posts. There are so many lady monsters that now, almost a year later, we're still writing about them. After A to Z, I started Monster Mondays, a weekly feature focusing on female monsters with several contributors. We're already planning our 2016 run.

Did you have a favorite monster you had to leave out?

I've since had a chance to write about her, but I really wanted to include Dragon from the Shrek franchise in the original run. Dzunukwa, a Native American mythological figure, made the list instead.

Irena Dubrovna Reed was the main character in The Cat People. Which version of the film do you like better, 1942 or 1980, and why?

I definitely prefer the 1942 version of Cat People to the remake. There's a sense of something about the first one--what I can only describe as impending doom. Irena knows about her curse, is steeped in the legends of her Serbian ancestors and afraid of her own sexuality because of what might happen. There's so much meaning in that, so many layers to pull apart as her lover and her psychiatrist try to puzzle all of this out. The 1980 version is almost devoid of that sense because Irena has been raised by a foster family and knows nothing of her ancestry.

That said, the 1980 film is a fascinating contrast with the 1942 original, and both tell us a lot about the sorts of women we fear, how those fears morph over time.

Why is the Chimera considered a hybrid and symbolizes wickedness?

The Chimera is, herself, a hybrid--though Greek sources vary a bit on her description, they seem to agree that she has parts of a dragon, of a lion, and of a goat. The Chimera was a great monster---she flew about burning the land and eating lots of cattle until she was killed in battle.

In the medieval ages, the Malleus Maleficarium, a famous treatise against witches, described women as a chimera, made of three corrupted parts. It is this work that aligned the Chimera with general wickedness and the female sex.

Why does the Red Queen have such a big head?

The Red Queen's power went straight to her head, enlarging it to 3 times its normal size. It is an outward manifestation of her inward condition, an inflated sense of self that overwhelms everything she does. It also infantalizes her---baby's heads are proportionally much larger than adults.

While I'd love to say that I have that all figured out, it would be so far from the truth! I generally start planning for A to Z in February. The one thing I can definitively say is that I plan to continue my pattern of focusing on girls and women---in 2014, my first year in the challenge, my theme was Girls in Children's Literature, and 2015 was, of course, Lady Monsters. 2016 will continue the thread.

Lady Monsters!! There are/were lots of them. What an interesting theme. I thought Cruella Da Ville was one of the worst.

Ladies as monsters seem to have rocked the Challenge quite a bit!

I did not realize that there would be enough monsters to cover A to Z. wow!

It is incomparable trading software that simple trading techniques you have stabilize stream of profits daily. It is a newly launched automated software for binary option trading which deals with you to take a look at signals and remain logged in while trading. It provides different secret strategies that eventually helps traders without utilizing any complicated trading indicators or follow graphs.

Hi Diana and Alex - Lady Monsters - great choice of thought ... and there are plenty more than 26 ... I'd have to go with Cruella de Ville - she was amazing! Cheers and here's to the A-Z ... I have my theme - and will write them during this break ... Happy Christmas and a wonderful 2016 - Hilary