The A to Z Challenge saw some awesome themes. One of the most intriguing was Fiction to Reality by author Andrew Leon at Strange Pegs. Andrew put so much into his posts – the research he conducted was amazing. I asked Andrew to share a little about his theme for the 2012 Challenge: 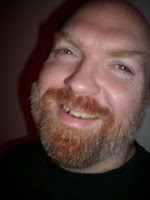 Your theme was fiction to reality – what made you choose that?

Actually, my wife came up with the theme. I was sort of thinking out loud to her about all of the themes I'd thought of and why I'd rejected them (and having a theme was make it/break it thing for me; I wouldn't have done a to z without one), and she said something like, "Well, why don't you talk about things that started out as science fiction but are now real?" It was a great idea, and I went with it. Of course, not quite everything I chose is science fiction, which is why I did just fiction to reality.

What subject was the most difficult to research? 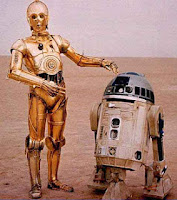 Oh, man, that's not even a fair question. Oh, well, wait... do you mean something that's just what we would call a robot, or do you also mean android? I'm gonna go with the 'droid answer, and I would pick R2-D2. I want one. Of course, I also love 3PO. I also love the character of Daneel Olivaw from Asimov.

Who was Tom Swift?

Tom Swift was a character from the, appropriately named, Tom Swift books. He was a boy genius that got himself out of trouble through his inventions. Tom Swift was conceived of by the same guy that thought up The Hardy Boys and Nancy Drew. There's still a current series of Tom Swift books out there a century after they first started being published.

Any plans to go back to school for a degree in Xenobiology?

You know, I think I'll skip anything that's going back to school. I think of taken a very Ray Bradbury view and decided that free education is the best education. Which is not to say no education, but reading and choosing what to read very deliberately is a much better way to learn than paying an organization a bunch of money to get a piece of paper. 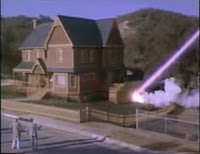 You’re not secretly building a laser or raygun, are you?

Hmm... I can't really tell you that, now, can I? Just, you know, be wary if you wake up one morning to find your living room filled with a giant Jiffy Pop container. I actually do have an old story -somewhere- about a boy that makes the first handheld laser weapon. That was back in college, though, and I'm not sure where that's packed away.

If you do the Challenge next year, what theme would you tackle?

At this point, I have no idea. I haven't had any good ideas, yet, so that question is still just hovering around out there. I won't do it without a theme, though, and it has to be a theme that I'm not gonna find on a dozen other blogs.

Thanks for having me Alex! I really did enjoy all the research and stuff I learned by participating in the challenge.


Andrew, thanks for doing the interview and can’t wait to see what you come up with next year!

Andrew Leon raises some very interesting issues at Tossing It Out today and on his own blog as well. I encourage everyone to check out both posts.

Hmm? Did not know Nancy Drew was written by a man.

Great interview, his theme in April was terrific.

I will have to go back and check on his theme. It is one that is very much of interest to me, I have been saying things about sci fi coming true for years.

I loved Daneel too.

Great interview and I loved your blog during April, Andrew. Thought I had followed it, but must have hit the toggle switch and been brought there at random. Even better. But I fixed that.

I also did not know that about Nancy Drew and the Swift books.

And I too can't wait to see what you come up with for next April. So glad you are writing now, and that you listen to your wife! Smart man!

Alex, you came up with some fun questions. Andy, that book series reminds me of Danny Dunn. I loved those. On an unrelated note, I had that exact dissect-an-alien toy! Thanks for the flashback.

I guess I didn't grow up with Tom Swift. I don't remember him, but sounds interesting. I may have to look up ole Tom.

Em: Actually, most of the Nancy Drew books were written by women, but the character conception came from a man. The books from his studio were written by many different authors that all wrote under the same pen name for the particular series.

Sharon: Thanks! I am already trying to think of something for next year.

Maurice: Thank Alex for that particular picture. (the rest are "mine")

I think that these are the most interesting questions I have ever come across in any author interview anywhere. Andrew, your answers were equally impressive. The force must be with you both.

Andrew is awesome. He always calls it like he sees it.

Michael: Thanks! Although I can take no credit for the questions other than the topics I chose.

Matthew: Thanks, Matt! Today, especially, that means a lot to me. :)

Maurice, I found that game while Googling Xenobiology.

Thanks, Michael! I know how author and blogger questions can get repetitive.

Great interview Alex, very interesting how others go about doing the A to Z.Also the different themes they choose and why. No I won't punish you all next year doing a theme about Danny Boy......lol

If you Jiffy Pop Alex's house, will you post video!?

If Daneel Olivaw is the one I remember (Robots and Empire series?), I loved him!

Thanks for sharing the interview. It does seem like a lot of research. I still have to visit his blog.Pretty soon I shall.

LOve This Dear! i enjoyed seeing it, Thanks For Posting ♥

If you have a minute, please check out my blog and follow me if you liked it. I'll appreciate it so much! Thanks!

You interview right nice, Andrew. And Alex, you came up with perfect questions for him.

Question: Andrew, are you familiar with "Tom Swifties"? (You must be.) They're one of my favorite forms of punning. There's a whole dictionary here. For example, "We must hurry," said Tom swiftly. "I've only got diamonds, clubs, and spades," said Tom heartlessly.

Am I the only one who thinks there are endless hours of entertainment in these things?

R2-D2 is our name for our robotic vacuum cleaner. R2 is like a member of the family and he almost looks alive as he cleans the carpet and vacuums endlessly.

Shannon: Yes, if I use a giant laser from space to pop popcorn in Alex' house, I promise to post a video of it. :P
Yes, that's Daneel, but he started in Caves of Steel.

Munir: Then I'll be looking for you to stop by! :)

Jericha: Why, thank you :)
Yeah, I love puns like that, and they're one of the reasons I want to actually get around to reading the Swift books some day. I actually read over a bunch during my Swift research.

That is an awesome theme, your wife is a genius! I didn't read any of the A-Z posts this year, (my bad) and I didn't participate due to health problems...but next year...just wait! You are the blogging star of the day Andrew! busy busy.

She is, but I can't tell her that. It goes straight to her head. :P