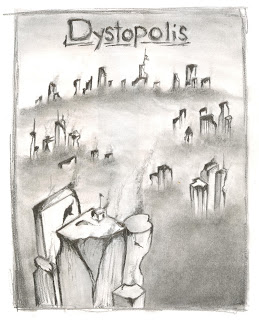 Last year my theme was Beautiful Things, inspired by the title track of Gungor's album. I enjoyed it, and the challenge lived up to its name! This year I was all but decided I wouldn't participate due to another job change and an addition to our family. However, there was a story bubbling under my skin, and a couple nights before April I made quick plans to jump in no matter how unorganized I was.

The theme from last year had me writing about different objects that I considered beautiful, but this year I wanted something different, something more cohesive. The idea I settled on was a short story. The plan was to post a small portion of a dystopia each day of April, and at the end of the month I'd have a rough draft.

I had no outline to begin the month, and I had no idea if it would work (and that's still up for debate). The only bit of story I did have was the ending, and I wrote everything with that in mind. The challenge created a deadline that I thrived upon - and it really drove the story. I was forced to pound away at Adam and Evie's tale, even if I had no idea where it was going when I sat down. Those April mornings weren't something I dreaded, but something I looked forward to, something I needed.

And when I remained faithful to that deadline, faithful to the story, I found that the story flowed. Characters surprised me, events popped up that I didn't foresee, and the tale took up its own life.

Of course I couldn't sustain the pace of April. At times I'm glad for that, and at times I hope for the day when I can sit down every day with a deadline in front of me and allow the story to come to life. Maybe next April will be another step in that direction.

If you're looking for a way to jump start your blog or give yourself a deadline for that short story you've been meaning to write, why not join the fun next April? The A-Z Challenge will stretch you and encourage you, just as it did me!

Additionally, I hope you'll give "Dystopolis" a chance. You can now purchase the story for the Kindle on Amazon for $0.99. Stop by my blog, Reflections on things fantastic, to read a preview!

Thanks so much for being here today, Ian, and for the chance to get your book at such a good price! I'm looking forward to reading it – one of my favorite genres!
~Tina

That is such a great idea!! Next year I just might have to create a fiction blog and try it!

Thanks for the chance to be your guest here, Tina! The Challenge is fun and I know it takes hard work to make it all happen - so thanks again for that, too!
(Ian)

Ian, congratulations again! I'm impressed by the authors who write during the Challenge. So many great books have come from that.

Hi Ian .. I must come back and have a look at your posts - love the idea ... and it's obviously given you a great boost ..

Good luck with the sales - cheers to you both - Tina for hosting and you for posting .. cheers Hilary

Thanks Alex and Hilary for stopping by! Love to know what you think of the story Hilary!

That is pretty cool that an entire book came out of the A to Z Challenge!