How to Prepare a Dragon Cave Without Tossing Your Dwarves

Al’s dwarves had committed to being Ninja Minions during the Challenge, which meant they were busy before April. Dragon caves need cleaning. Dwarves must be tossed. And in between it all, Al had to maintain his sanity…

Your theme was the preparations of your dwarves for visitors to the Dragon Cave during the Challenge. What made you chose that theme?

I tend to be wordy and that makes me terrible in flash writing. Previous to the challenge, the advice I saw the most was to keep the posts between 100-300 words. Keeping it short was a challenge in itself for me. Since the subjects I discuss at the dragon cave often take longer than the average post, I searched for a "lighter" theme. My usual readers know I focus more on exploring the dragon wisdom but the name "Father Dragon Writes" sometimes makes people to think I am focused on fantasy. I thought it would be fun if I put aside the philosophy of life for a month and show the magical (or chaotic) side of the Cave and the "finest" dwarves in my staff. It really helped me to get reasonably short but still entertaining posts.

What was your favorite letter?

R for Rehearsal. It was the day the Dwarf Cheering Squad presented their new drill "Fireworks". I had so much fun with it that the clip still puts a smile on my face each time I see it. At least in my case, the Squad's success was total. They do cheer me up. 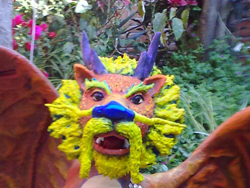 For F, it was Father Dragon – and a sculpture. (Which was amazing by the way.) How long did it take you to make that?

Two months, but it is not finished yet. This was funny. I promised my knight friend I would make a dragon for him. When I was wiring the skeleton, I had a different dragon in my mind. While I was shaping it, I thought it would be cool if the dragon have a special meaning for both of us. I thought on how our friendship started and how he encouraged me to let the world know who I was. All of a sudden, I was shaping Father Dragon and making plans to add the dwarves, S.A.M (the ninja muse) and a knight as a set. I'll have to make another dragon to make up for the time this project will take but I'm stating in my last will the whole set shall go to him.

Is Pancholin a good dancer?

Not really. In his mind, he has two left sides and two right sides. Tell him to go right and he moves left. Say "front" and he goes right. Motion him to step back and you'll have him spinning. Tassin came up with the idea to have Pancholin hold a taco on his right hand and a beer on his left. He did better at the orders of "taco" and "beer" but he also won some extra pounds. Besides, being shy made things even more difficult. 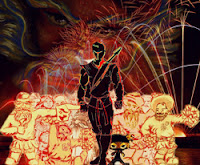 Tell us about the X-Dwarf Files.

Must I? I still have nightmares about cloned dwarves coming out of a tea pot like ants smoked out of a hole. When I allowed my dwarves to become Ninja Minions I thought I had trained them better than to be snooping around the Ninja Headquarters. Tassin was in charge to report their daily performance. At first, it sounded like they were not doing good and many dwarves went missing. I suppose that's when they found the cloning machine. Aware of their crime, they tried to hide it from me by sending a picture of the group. Just they sent me the picture of the clones instead. I almost had a heart attack when I got 600 dwarves back instead of the original 150. Look, I still suffer a nervous tail twitching as a consequence. It got better after I took most of them to the pawnshop for fantastic creatures, though.

How does Dwarf Tossing work?

Dwarf Tossing is a championship to see who can throw a dwarf farther. I used to throw them when I was angry and found out it was extremely therapeutic so I invited my friend, Sir Jeff, to try. That's how the competition started. Since these are Heavy-duty dwarves, they are also dragon proof. They are certified under the DWARF 9002 Quality Standards so they are resilient and bounce well. If you want to enter the championship, you are required to bring your own certified dwarf. However, I offer lessons for beginners and the fees include a dwarf for practice.

No, if my nephew is involved. The hatchling likes to play rough, you know. But it's part of the dwarves' job profile. There is a specific clause that reads they have to wear any clothes (or costumes) their Master may require, be it Angry Bird, cheerleader or Copacabana show dwarf.

After a tour of the Dragon Cave, guests were invited to hit the souvenir store. What gifts were available for purchase?

The original idea was to have lunch boxes, t-shirts, and coffee mugs. Unfortunately all dwarves were on commission as ninja minions. Zenon, the oldest of my dwarves, did a few postcards for the souvenir store. He didn't sell anything but we made him believe the Metropolitan Museum of Art bought them all. Now he spends his time creating "Post-modern Doodlism."

What about the Challenge stands out to you most? What moments were really cool?

The chance to meet some really wonderful and interesting people was what I liked the most about the Challenge. There were many cool moments. The first week was very special for me as I got surprises that touched my heart. However, I must confess the coolest moment was when I realized people actually liked my posts. I had started blogging only four months before I heard about the Challenge. This was my first A to Z and as I said, I had no experience in flash writing. Honestly, I signed up pleading the Higher Powers for help, so I wouldn't suck too much. I certainly didn't expect the positive response I got. I must thank all those who visited the cave and I take the chance to thank you too. I was very surprised you thought it would be interesting to interview me. I feel really honored.

If you were to do the Challenge next year, what theme might you tackle?

I don't know. The A to Z proved to be extreme excitement for me. I might let Zenon do Post-modern Doodlism from A to Z. If he doesn't get lost again on his way to the toilet, that is. Last time, it took us two years to find him.

Thanks, Al! Hope you are back next year. And we’ll keep the dwarves away from the cloning machine…

Excellent to read which cheered me up. Thanks for sharing this with us.

Thanks for doing the interview, Al!

Thank you, Alex, for the invitation. It was a really fun interview to answer. And you did a great job putting it together! YOU rock!

Awesome Al. I really enjoyed all your posts during A-Z. The Dwarf Cheering Squad rocks! :D

I love that video you made and your posts were a lot of fun.

Is there a background check for the purchase of a certified dwarf, or can anyone buy one, regardless of mental health and criminal history? Just wondering - uh - for a friend.

I'm really amused by your creativity, Father Dragon. You put a great deal of time and imagination into the challenge.

This was great Al. You must have had a great time doing this.

@Yvonne: Now *that* is a reason for dancing. I cheered you up!
@Elise: Thank you!
@L.Diane: I'm happy you enjoyed as much as I did.
@Robyn: Anyone can buy one. They know how to take care of themselves. Thank you, Robyn!
@Sheena: Indeed. It was fun. :D

I'm so glad you participated in A-Z so we could discover you and your epic sense of wise humor:)
Cheers!
WriterlySam

The dwarf cheerleading squad is genius. And the sculpture is beautiful. I always enjoy visiting Father Dragon's cave.

I loved your A-Z posts and Fireworks always makes me smile too. I hope you and the dwarves are back for another round next year, Al! :)

Hey Al,great interview. I'm glad you got your dwarves back...and then some. I want to get my hands on that cloning machine...if it's still operational. Dwarf tossing sounds like a great sport, but at 5'3", not sure I could do it. Unless a dragon helped me...
Tina @ Life is Good

the world needs more dwarfs... we should all get together and have a cup a coffee... and toss in a dwarf or two.

@Sam: I'm glad I met you too!
@MaryPax: And you're a bright star in my sky.
@Cherie: coming from you, I am already blushing.
@Julie: Smiles make me and the Squad happy!
@Tina: No worries. I'll teach you and help you. You'll have fun if you enter. :)
@Jeff: You flatterer. Hahaha. :)

I didn't realize the dwarves were for sale.... Can I have Sessin back? Jezebel took a liking to him. ;)
Your A to Z posts were great, Al! I'm so glad I stumbled into your cave and made a lifelong friend!

First of all, one moment please....A to Z...Argggghhhhh!!!! Sorry about that. I feel better now!

I love dwarves and dragons. Just watch them around alphabet challenges.

What a fun interview and now I have more of an idea of what's in the Cave :)

Glad the Dragon is enjoying himself .. the dwarves will keep us amused .. cheers to all Hilary

Wonderful interview, Alex and Al! You make me smile! Thank you!

The only problem with dwarf tossing is that due to my shortness, I'm afraid I would be mistaken for a dwarf and tossed . . . and I'm not sure I would like that. :)

Thanks for the great interview Father D and Alex.
That sculpture is amazing!
And "Post-modern Doodlism" sounds very interesting. Would love to learn more about it.