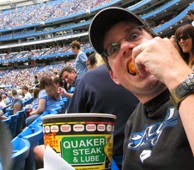 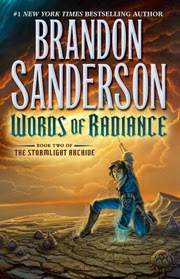 Your theme was speculative fiction book covers – what made you chose that theme?

Well, I knew my theme was going to be book related (that was a given), but I wanted to do find a way to do something different. In hindsight, my little literary alliteration of the year before really used up 2 themes at once, matching authors and titles, so I was stumped. For a while I actually considered skipping this year’s challenge, until a review copy of Words of Radiance landed on my doorstep. I review so many digital titles, a hardcover was something of a novelty, so I really spent some time admiring the wrap-around dust jacket – and that’s when the idea for the theme clicked.


What type of artwork draws you in? What do you look for in cover art?

Something bold and vivid is what usually draws me in – I like a book cover that calls to me from across the room, demanding that I give it a closer look. It’s not so much a style or even the lines, but the colours, the interplay of light and shadow, and the illusion of movement. I prefer a cover that captures a scene, as opposed to one with characters posing for the artist’s eye. 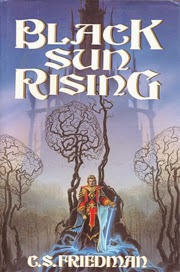 Which artist was your favorite?

I’d have to go with Michael Whelan as my favourite. He has such an identifiable sense of style, with covers that are vibrant and real, and which just have that ‘epic’ sort of feel to them. 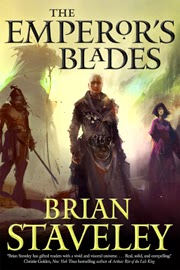 Which cover was your favorite?

That’s hard to say. John Harris’s cover for Ancillary Justice definitely caught my eye, as did Daniel Dociu’s covers for The Expanse series. I think the cover I found most striking, though, was Richard Anderson’s cover for The Emperor’s Blades. The colours there are more subdued, and more background, but the layering of the three almost jagged silhouettes with the background imagery really worked for me.

Everything was sailing along nicely until I hit the letter ‘X’. I searched for days trying to find an artist or two, but kept coming up empty. In the end I had to bend my theme a bit and just look for an artist with an ‘X’ in their name – which, as it turned out, was fine since it allowed me to give Richard Hescox some page time. 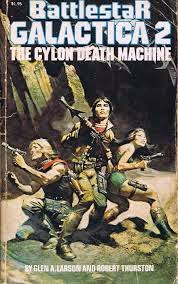 Who was the oldest artist you featured?

How important is cover art? Does it influence your decision to read and review a book?

As a reader, cover art still has significant appeal to me when physically browsing a bookstore, and has led me into giving more than one a new author a read. I’d never choose (or not choose) a book based solely upon the cover, but that cover can tempt me into reading the back cover.

As a reviewer, however, cover art has almost no impact. Most of my review requests are either based on a pre-publication ARC that doesn’t have a cover, or a text-based sales pitch that comes in via webform or email, so it’s really all down to whether the cover blurb catches my attention.

If you do the Challenge next year, what theme(s) are you considering?

I’ll probably be scratching my head over that again until the end of March, but I’m toying with something revolving around names (characters or places) that have been memorable for me.

That would be a cool theme – thanks Bob and see you next year!

Hi Bob .. interesting to see your comments on cover art ... I do like art that relates to its subject ... and you obviously had a novel theme for the A- Z .. see in the Challenge next year .. cheers Hilary

Thanks for having me stop by, Alex!

Thanks, Hilary - it's always fun to take part in a community event like A to Z.

I love cover art, and like to look for the symbolism in it. However, I'm 99.9% Kindle converted, so I've missed a lot. Of course there are the cover reveals all over the place, so I do still get my "fix". Great theme, and it's obvious you put a lot of work in to it. Glad to have you part of the A-Z Challenge community.
Tina @ Life is Good
On the Open Road! @ Join us for the 4th Annual Post-Challenge Road Trip!

Cover art plays a large role in my book choices. That was a really clever theme for the A to Z.

It's amazing what Kindle has done for book covers, isn't it? There will come a day when kids will have no idea why they say you can't judge a book by its cover.

Cover art is a great topic. There are so many different styles and just as many talented artists to highlight. I'm sorry I missed it!

Oh I love that as a theme. There are a lot of great book covers out there which definitely help to draw me in.