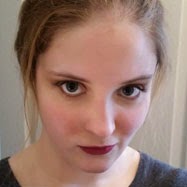 Today we welcome author Tracey Lynn Tobin from No Page Left Blank. She chose a really fun theme for the Challenge!

Your theme was Favorite Fictional Characters – what made you choose that?

When I decided to try out the A to Z Challenge I knew that I wanted to pick a theme to help me work my way through the month, but at first I didn't know what kind of theme to choose. I thought about a number of possibilities, but most of them had a number of letters that would be difficult - if not impossible - to work in, so I vetoed them all. I was actually playing a video game when it occurred to me that fictional characters come with all kinds of strange names, and that's when I decided on my theme. I read a lot, play a lot of games, and watch a lot of TV shows and movies, so I knew I could come up with 26 characters whose names all start with different letters. I decided to make them all favorites of mine to make the theme a little more personal.

Which letter and character was your favorite?

There were a lot of good ones, but my favorite was probably a letter that a lot of people find difficult: X. I thought this letter would be torture, but within seconds I realized that one of my favorite characters ever starts with the letter X: Xander Harris. Buffy the Vampire Slayer is one of my favorite TV shows of all time - I've re-watched all seven seasons multiple times - and I always thought that Xander was an awesome character. I love how he's a bumbling idiot at the beginning of the show and he just grows and grows and becomes this super-dependent person by the end of it.

Most people probably have a lot of trouble with Z, X, and Q, but I had those ones all worked out right from the beginning. The letter that gave me the most trouble was O. Try as I might I couldn't think of any characters (at least, ones that I personally enjoyed) that start with O. Eventually I settled for "Other Mother", although it felt a little like cheating since it's not really her name, just what Coraline refers to her as.

I saw the banner - tell us about the Supernatural A to Z.

When "theme reveal" day rolled around in 2014, several participants noticed that they had all chosen a "supernatural" theme for their A to Z Challenge; they were all planning to blog about things like ghosts, monsters, demons, and so on. Tasha over at Tasha's Thinkings decided to put together a little sub-group for the challenge for people who'd all decided to blog about these kinds of things. I didn't join right from the beginning since I'd actually joined the A to Z Challenge at the last minute and hadn't come across this little sub-group, but a few days into April one of the other participants put me on to the Supernatural A to Z. He thought that since some of my characters were from supernatural worlds, that perhaps I would like to take part. I signed up and met a few new friends as a result, so it made the A to Z Challenge that much better.

Okay, right off the bat, Deadpool is not a villain...he's an anti-hero. lol Okay, yeah, he does some bad things every so often, but most of that is because his brain is kind of broken. In the end, usually everything he does works out for the better, so he can't really qualify as a villain. That said, I do love villains, and a lot of the time it's because they're so much more interesting than the heroes. I love the insanity, the drive for power, and a lot of the really awesome villains are the ones who are damaged inside because of some horrible thing that happened to them, or some miserable situation they've been through. Some of my favorites? Well I love Loki, from the Thor universe, and no one can deny that the Joker is one of the greatest comic book villains ever. I was also always a big fan of Boba Fett from Star Wars, and I love Spike from Buffy the Vampire Slayer, although he becomes somewhat less of a villain as the show goes on.

Who is Gau, the Wild Orphan?

Gau is one of the playable characters from Final Fantasy III (US version), which is still one of my favorite games of all time. Gau is a strange, feral boy that you find on an island called the Veldt. He joins your party after you give him some dried meat to eat, and his special ability is that he can learn the abilities of monsters in the game. If you return to the home of a strange miser after taking Gau into your party, you learn that the man is Gau's father, and that he abandoned the baby on the Veldt after his mother died giving birth. The man went a little crazy after all of that, so Gau leaves him be and continues on with your party, following wherever they go.

What fictional character did you hate to leave out?

There were a lot of possible subjects for the letter T that I had to leave out. It ended up being a showdown between Tyrion Lannister from Game of Thrones and Thor, but Tyrion won out in the end because I'd already done several other comic book characters. I also gave up Terra Branford (another Final Fantasy III character), which I hated to do because as I mentioned, Final Fantasy III is one of my favorite games ever. Honestly, I probably could have done 26 days worth of the letter T, but of course that would have defeated the point of the challenge.

What theme are you considering for this year’s Challenge?

Honestly? I've been wondering about that for a while now. I briefly considered doing the same theme with different characters, but I don't know if I want to repeat myself like that. I'd like to do something that relates to my writing, but I'm not sure what I could do in that vein that would allow me to come up with an idea for each letter of the alphabet. If possible I would like to relate the challenge to my writing somehow, though, so I'm already working on trying to come up with ideas so that I'll be ready when April comes along.

Thanks for the interview, Alex! I can't wait for the challenge to roll around this year.

Glad you’re excited about it, Tracey!

Thanks for doing the interview, Tracey!

I remember the "supernatural" sub-group from last year... lots of bloggers with themes involving ghosts/vampires/demons/monsters, and other kinds of spooks, signed up.

I wonder if other A-to-Z'ers will try forming sub-groups, e.g. sci-fi themes or flash fiction themes, and I'm also wondering to what extent would sub-groups enhance the overall A to Z experience...?
I suppose it depends on whether those signing up for the particular sub-group intend on sticking ONLY to that group for the duration of the challenge. Probably.
I suppose it also depends on how many blogs per day one can really afford to visit... there are time constraints...
Will be interesting to see.

I have already decided on themes for by blogs for the challenge too. I am not sure if mine will mirror anyone else's but if so maybe I can join a subgroup.

As a fan of all things supernatural, I enjoyed visited numerous blogs following that theme last year. Hopefully, I'll find a few more this year.

I am a fan of themes for the AtoZ Challenge. As a Family Historian and fourth year AtoZ Challenge participant, I find the 'Theme Based Challenge' works perfectly for sharing photos and stories. On my blog, CollectInTexas Gal, I have started prepping my readers for the coming 2015 Family History Stories by writing posts and showing a few of the photos I plan to use. At the same time I am promoting the AtoZ April 2015 Challenge with links to this website, the SignUp page and Banners.

Thanks Alex and all the Hosts for getting this years Challenge off to what promises to be an outstanding month of blogging.
Sue at CollectInTexas Gal
AtoZ April 2015 Challenge Organizing the 1950's for AtoZ 2015

Enjoyed reading about Tracey's theme! Seemed like a cute one for last year!

Loved the Supernatural A to Z. It helped me find your blog!

Doing a Supernatural theme too! We should all hook up again this year.

holy crap! that is so funny. I was working on a theme and actually called my daughter "guess what im going to do for X?" she said Xander. and I told her I bet no one else will come up with that. it was a memory of my daughter and I doing the Xander and Anya song from once more with feeling. I cannot believe this. hahahahah!!!!

I like Xander too. what better character than Xander for the letter X !

I do like an A to Z with a few interesting or strange characters in it. I am working on Victorian Inventors this year and hope to kill most of them off.

You chose a great theme, and I'm glad Alex sent me over! I've started to jot down some ideas for posts, but I'm not even half as organized as you are, Tracey! Best of luck with the challenge!

Missed you last year - anyone that chooses Xander and likes Spike is okay in my books :) x