E is for Exorcism 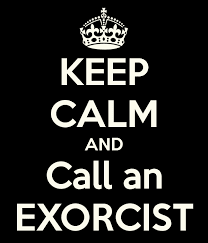 Few words in any language can illicit such strong emotions as the word exorcism. Most cultures from the beginning of time have believed in and practiced some form of exorcism.

Can a person be possessed, inhabited, made sick, or controlled by an outside malevolent force? Can certain events in a person’s life trigger an open a door for such a thing to happen? And if so, can that hostile presence be excorcized.

I believe mankind is a three-fold being of body, soul and spirit. So the question arises, can something invade a person, pitch a tent, and set up shop? And if so, would this happen in the realm of the body, soul, or spirit? Or can it latch on and hitch a ride, following a person around and being a general al-around pain in the ass? 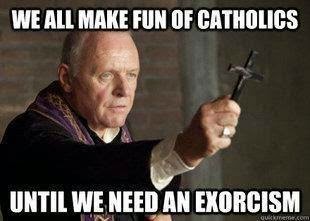 In an exorcism, the process is relatively simple. It comes down to authority. The trespassing spirit is kicked out by an authority that is bigger, stronger, and badder. That’s it in a nutshell.

That being said, the person possessed has to want to be delivered. If they do not want to cough up the spirit, well, there’s not much that a bigger authority to can do because the host, for whatever reasons, decides to allow the evil presence to remain. Power would be a good example. Addiction is another. Some people enjoy a good pity party. The choices are many.

Groaner of the Day: What happens when you don’t pay your exorcist bills? You become repossessed. Rimshot please. 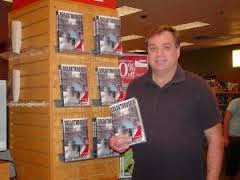 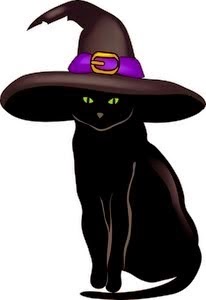 Stephen Tremp is a Speculative Writer and blogs at Breakthrough Blogs. His theme for the 2015 Blogging A to Z Challenge is The Supernatural and Paranormal. His latest work, Salem’s Daughters, is due for release Labor Day Weekend 2015.
Posted by Heather M. Gardner at 7:01 AM

Whatever I know about Exorcism , is through movies ... and that's pretty scary stuff :)

That meme is hilarious! Great blog.

Obviously he is of a strong soul! My 'E' posting:

Thankfully I have never needed to call upon the services of an exorcist. I'm not sure I believe in possession by demons etc but I always keep an open mind - you never know!

Great post Heather thank you! Yup those demons reside within - addiction power etc. Only we can exorcise or continue exercising them ...Love the Groaner!

I could probably use an exorcist from time to time - at least that's what they tell me. (Smile)

Lol, "What a wonderful day for an exorcism!"
@Get Lost in Lit

Well there you go, bringing in the big and creepy words... thank you!

I chuckled at that joke.

I worry for people who think ghosts are real, because my initial reaction is -- it's demons! Call on Jesus!

I remember the first time I watched The Exorcist. Oh my gosh, I was scared to death!

Real or not (and I'm leaning towards "not"), demonic possession makes for gripping entertainment.

Then there is the ridiculous take on demonic possession, which I saw in Days of our Lives many years ago - Marlena being possessed. ;)

I do believe that there are spirits able to possess people. These spirits are bodiless and hence unable to feel with the normal 5 senses humans can. Possession gives them back those senses and gives them a vehicle to interact and influence humans around them.

I've run into a few possessed in my life time. I can't think of any movie that is scarier than seeing or being around someone who is and those who are rarely act like the character in The exorcist much of which was for dramatic effect. There is a feeling that raises the hair and hits you right in the instinctive gut. Definitely get out of Dodge and as quickly as you can.

Bad pun!
Only only power is stronger.

This is a concept I've been thinking of writing about. Something a bit scarier than my normal stuff.
http://stormiekent.com/blog/

Like Rajlakshmi, what I know about exorcisms are from Hollywood and that's pretty frightening.

Recently attended a presentation by a Catholic priest who is trained in exorcisms. Certainly an interesting conversation!

I love this topic and my E letter hinges on a character I developed that ends up needing an exorcism (ironic). I'm a big horror/paranormal fan and also write in the mind, body, spirit arena in nonfiction. I will be checking out your "Salem's Daughters" ASAP. Sounds like a great read and right up my alley.

I do love that cat!
Heather

Hey, you share a picture from one of my favorite movies, The Rite. I'm not sure I believe in exorcism or not but that film made me think it could be real. Very powerful acting by Colin O'Donguhue as the young priest.

I laughed at the joke. I admit it.

Like Michelle, I love your joke! And that image is fun ... unless you DO need an exorcism! As a cat person (and dog, too, come to think of it) I smiled at your witchy cat.

Hilarious joke, thanks for sharing this.

Hi Heather - we had someone come down to give a talk .. as I'd been out of the country in the 1980s I didn't know him .. but I really wasn't happy at his talk. Just not sure if he was too big for his boots or what .. put me off.

Though exorcism I'm sure can help some people and haunted areas .. cheers Hilary

Okay, that final punchline was pretty funny! I have done quite a bit of reading about exorcisms, actually. I recommend a really interesting book on possession by a man who has conducted exorcisms called Spiritual Warfare by Dr. Karl Payne. Great read.

Too funny, Stephen.
Those things scare me, so I don't even watch movies and such ...

I'm getting late start today. Great to see all these comments on a very interesting topic. Thanks for stopping by!

Susan, amazing the power addiction has over people. That's a real tricky one as it can transform itself to another addiction. An alcoholic can seem to be cured only to switch the addiction to marijuana. Then it's off to cigarettes. Then food. So although addiction may seem to be conquered because an alcoholic stops drinking, it merely manifests itself in another form.

Heather, I thought that is a perfect image to help promote Salem's Daughters.

Hilary, I've seen a few, and it's the deep gurgly voice and thrashing that is most disturbing.

WOW You really know your stuff when it comes to exorcism! Are you writing from experience? lol All I know about it is what I've seen in the movies and that is scary stuff. Awesome post :D
Suzy Turner: Author, Yogi Wannabe & Self-Help Geek.

You're repossessed. Giggling, here. That is too funny. I'll have to think on that one. :)

Love the Groaner of the Day. Congratulations on Salem's Daughters

Scribbles From Jenn - Visiting from the A to Z Challenge

Love the groaner and the cat :) Congrats on Salem's Daughters!

I'll admit it; I've always wanted to witness an exorcism. But not my own. Not that I need one. At least I don't think I need one...

I don't think people can be possessed. People did not understand mental illness and other maladies at one time. Unfortunately, people do not understand it today.
However, you can create a scary story with the topic. lol

You are spot on with people needing to want to have their demons exorcised. Most aren't willing to go through that painful process.

Exorcism is a debatable issue but always generates interest.

Love the joke! I totally believe in possession by evil spirits and that they can be exorcised for the simple reason that our Lord cast them out in the Bible. The Bible has Truth, without any mixture of error. I believe that alcoholism, and homosexuality, and sex addiction, all those types of things are fanned by demonic activity. Human beings may be born with a disposition toward a certain bent, but all mankind has free will choice and the power to make it, though it is easier with God's help. Demons urge man to chose wrongly and then keep him trapped in the harmful choice.
Life & Faith in Caneyhead
I am Ensign B ~ One of Tremp's Troops with the
A to Z Challenge

Love the joke. I need more laughter in my life. Especially after I read about exorcism.

Hi fella, I hope I am not running very late. Here is my take upon E is Embrace It, Embrace yourself. Hope you like it. http://bluesomeheart.blogspot.in/2015/04/embrace-it.html
:)

Exorcism is anything but not scary. I don't have any real life experience. Have just watched in movies. But still then it's scary and spine chilling.

Often Hollywood gets this right or pretty close. Makes me wonder what the writers and directors are into during their free time.

Delores, if interested leave a comments on my blog and I'll send you a link for a download or mail an advanced review copy to you.

Debra, you and me both.

Trisha, I didn;t see that but I can imagine just how corny it may hav been. Those are good for a great laugh!

Sia, I've been around them too. And they don't always wear rags and smell like urine. They often wear expensive suits and manifest tremendous authority over business and people.

Stephanie, thanks for stopping by and for your interest in Salem's Daughters!

Michelle, glad you liked the groaner.

Thanks Megan, I'll Google him before I go to bed.

Ann, I'm not ready to blame all sickness and mental illness on possession as some do. But I do believe with many there is a direct correlation. Not all. But certainly some. At least that's what I believe.

Barbara, there is a verse that says, "Let him that stole stop stealing." The same for lying. Point here is there is a lot of deliverance for people if they simply stop certain behaviors, habits, and addictions.

love the joke - it made me groan..but it is still clever

Why I called you Heather I do not know! I agree re addiction taking multi-forms.

Love this post. Congrats on writing your books. I have bought books on how to write books but not sure where to start. I am not sure if spirits can posses people but I do certainly believe in spirits. Thanks for the read.

I can't stomach horror movies, but one of the few that I've watched is 'The Exorcist'. I have to admit, it was really well made! And that meme is really funny!!