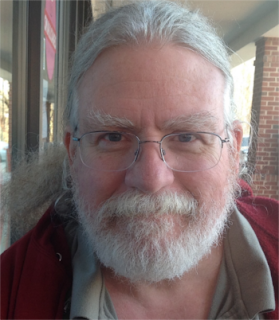 This is my fifth Challenge, my second as a co-host. I started my blog, The Sound of One Hand Typing, on Wordpress in January 2012, specifically so I could participate in this Challenge. I had been toying with the idea of blogging for a while, anyway, and had in fact started several blogs in the past, all of which I was embarrassed to leave lying around. It gets its name because a stroke nine years ago deprived me of the use of my right hand, but I wasn't about to let that stop me. What encouraged me was reading about the author Walter Wager, who wrote novelizations of TV series and tie-in novels based on them. I read somewhere that Wager only had one hand, and I decided that, if he could do it, so could I.

I blog daily, which I started in July 2014. I have a few regular features, and participate in a number of blog hops I've found along the way. I'm also technically inclined, and found a way to simulcast my blog to one on Blogger, which I talked about last year. This year, I created the Challenge's Pinterest and Google+ pages. I also participate in the weekly chats on Twitter. See what happens when you retire?

You can find me at either of my blogs, and on Facebook, Twitter, Pinterest, and Google+. I hope to get to know many of you during this year's Challenge! See you soon!

Hi John - congratulations on facing your adversity full on ... like the amazing piano players - one-handed ones .. and there must be others. Sounds like you're achieving loads .. and if you're technically inclined that really helps - I'd love to get better at that - perhaps a goal for this year.

However will see you at the A-Z .. other bits and bobs - we'll see! Cheers and enjoy that co-host role - you're obviously well suited to it ... and a great asset to the team - Hilary

Never let one hand stop you from doing anything!

Hi, John; You certainly have accomplished much in the blogging world! It definitely helps to be technically inclined, as well. I couldn't handle daily blogging on a regular basis, typing with two hands. Once a year for the A to Z is hard enough. See you there!

That's a great post, John!
Thank you for sharing!

You sir are an inspiration when it comes to focusing on one's strengths, as well as a testament to man's (or woman's) ability to find a way to do the things we truly enjoy. Cheers to you! Also it's cool how so many blogs were started because of the A to Z Challenge.

Hi, John ~ This will be my first challenge, and I'm both looking forward to it and a little nervous. Your post gives me the gumption to move ahead with it. Thanks and good luck!

Bravo for you, John. I understand the difficulties as my hubs had a heart attack a year and a half ago and is having mobility issues now. I'll be looking for your blogposts in April!

Nice to know a bit more about you, John!
You're a good example of what can be achieved with a bit of determination.

Hi John, Hope to catch up in April

Hi John.
You are a one-hand-wonder...a real inspiration!
I'm partially techno-challenged...but trying to improve.
Nice to meet you!

Hi, John. My mother in law is a stroke survivor and we also help care for her son, who is developmentally disabled. This is my second year participating at A to Z and I know it will be fun. Happy to meet you! Alana ramblinwitham.blogspot.com

I LOVE getting to know you better. And also? the Pinterest pages are the best!

That is inspirational! Pleased to meet you.

One of the techno-clueless brigade. But participating in the A-Z improves me marginally every year despite myself, so I should be okay in another 10 years time...

Sue from Sizzling Towards 60 & Beyond said...

Hi John, I signed up yesterday but couldn't see my name there. Does it need to be approved? I've not done this before and am looking fortward to the challenge

Happy to be back, and that I get more chances to "hang out" with you, John! I think you're my favorite "forced" lefty! =D While my topic of choice this year isn't your cup of tea, I'll still be glad to blog through the alphabet with you.

Great to meet you, John! I'm looking forward to my 5th Challenge as well.
Life & Faith in Caneyhead

Thanks for co-hosting and I am always a little envious of those with tech skills. This will be my sixth challenge, and I love the life it brings to my blog each year, as my writing seems to sag in March.