I've been part of the A to Z family for a while, and many of you know me as Damyanti from Daily (w)rite.

I'm camera-shy, so the spotlight is on Guilie Castillo, who is introducing herself and her team mates, (my gang) this year : D's Company.

Take it away, Guilie!
------------------------
The A-to-Z Challenge is, undisputedly, the blogging event of the year. In a community where blogfests and hops abound, that's saying something. And the magic was there from the beginning. In 2010, around 100 bloggers took up Arlee Bird's call to arms; by the following year participation had increased more than tenfold: over 1300 blogs signed up. And that number grows every year. Why? What's this A-to-Z magic that sweeps the blogosphere as soon as the sign-up list opens in January? 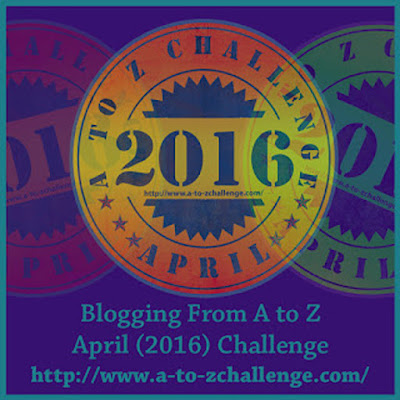 It's such a rush to see that list of 27 posts. We did it. Our creativity stood the test. We committed to something and we actually saw it through. That sense of achievement is a high that's hard to pass over. Last year I seriously considered sitting the Challenge out. Among other pressing things, I was behind — like, months behind — on the edits for my first novel, due for publication in spring 2015. But I signed up anyway. And I didn't finish. I skipped one letter outright, and my last post was a three-in-one. Should I have abstained? You know what? Nah. Finish or fail, the A-to-Z is the highlight of my blogging year.

This year I'm joining co-host Damyanti Biswas's team, and it's my pleasure to introduce the fabulous women who make up D's Company. 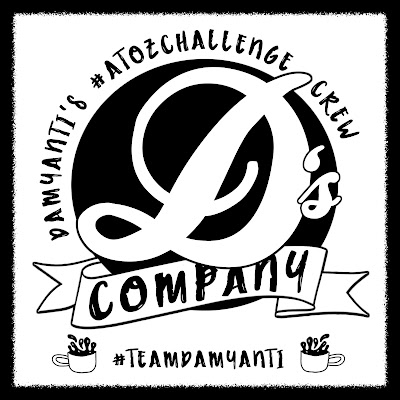 Vidya Sury Lives in hot-and-happening Bangalore. Tries to live mindfully, doing what she loves and loving what she does as a mom, writer, blogger, editor, and social media enthusiast.

Andrea Michaels A writer in love with the sky and the ocean and brown eyes in general. Regularity and structure aren't her strong points but she makes awesome pancakes.

Soumya Prasad The group's second Bangalorite is a hard-core techie. Her name means "one who is soft-spoken", which she considers the biggest irony of her life. A lover of love and all things related to it.

Samantha Geary Jones Speculative fiction author living in the heart of the Blue Ridge Mountains with her lover, her two adorable little girls, and a border collie sidekick. Freelance writer for film, TV, and the gaming and trailer music industries.

Guilie Castillo Mexican author and dog rescuer living in Curaçao. When not writing she'll be found wandering the island's wilderness with her seven dogs.

We're all looking forward to getting to know you!
------
Follow the A to Z Blogging team on our Facebook Page!
Email address is contactatozteam at gmail dot com
Twitter hashtag is #AtoZChallenge and Twitter id is @AprilA2Z.
If you have a theme for you A to Z Challenge, sign up for the Theme Reveal!

We’ll hold Twitter chats on Thursdays at the tag #azchat at 9.00 PM EST. Please follow the Twitter and Facebook handles, and the hashtags in order to keep up with the conversation.
Posted by Unknown at 8:01 AM

Yay Us! :) Proud to be part of D's Company
I agree with everything you said about the A to Z Challenge, Guilie. It is my mostest favoritest bloghop, ever. So looking forward to the excitement that's April! Hugs! And super-thrilled to be on the same team with you!

I missed all these elements and more last year. So excited we got the gang back together. AND to top it all off, Guilie made us an awesome COFFEE badge, so we're sufficiently caffeinated the entire month of April! Cheers to 'unprecedented friendships' and meeting the challenge!!

Thanks to everyone who makes the A-Z challenge happen!

That's a beautiful write-up, love how passionate you are about not just the challenge but blogging itself 💕

You've got a great team, Damy! And nothing grows a blog like the Challenge.

I signed up for the A-Z Challenge. This is my second time. Can't wait to get started

It's my First A to Z Challenge. I had some thoughts about what and how to do it. I came up with something and a theme of some sort. Now I am so curious to find out what the pros will do... Soon I will know.

It's an awesome team! So glad to be back in Damyanti's gang with you both, Vidya and Sam, and super happy to meet Misha, Andrea, and Soumya! Fun times, ladies ;)

Thanks, Heather! I'm constantly amazed at how many awesome people gravitate to the A-to-Z :)

That includes all participants, Sherry — so thank *you*! ;)

Too right, Alex... It's an excellent opportunity all around.

Bravo, Clao Wue—and welcome! We'll all be looking forward to reading your posts and getting to know you. Feel free to ask; we're all here to help :)

Awesome team! I am looking forward to getting to know all of you this year. Come on April! ~Lori~

We're going to have another mind blowing AtoZ spectacular. Your team looks great! I bet those guys know how to party.

I am so overbooked, I am afraid I am going to have to pass on the A-to-Z this year.

I'm getting my list of topics ready for this challenge! This is such a great way to get back into blogging. :)

Welcome D's Company! *waving*
What an awesome line up.
I know most of these fabulous bloggers...besides Andrea and Soumya.

I'm ready an' waiting and ready to jet off across the pond specifically for my readers entertainment. This years challenge has some meat on an' I'm chewing at the fat. Look forward to the group fun and new friends.

What an exciting group of people. One day, which I truly hope comes, I will visit India. I have always had a fascination about India. Some is from the nice people I have met who came from India. More from the pictures and images I have seen from India. One day, I will come.

Same here, Lori — and thanks for coming by to say hi!

That's a shame, Michelle. Hopefully 2017 will be doable; if so, see you then!

Thanks, Michelle! You're one of my first A-to-Z blogging buddies, did you know that? ;)

Oh, Ann, you'll love it! I spent two months there a few years ago, and got swept off my feet. Amazing country, amazing culture, amazing people. I'd love to go back.

The A to Z Challenge is the best! Love the D's company graphic.
Life & Faith in Caneyhead

What a grrrrrrrreat team!!

Hi, I have signed up and am on 119 on the list but I have changed the url of my blog as I have moved. Is there any way I can edit it to reflect the new on. It is http://www.inderpreetuppal.com for Eloquent Articulation.

I need to change it anywhere else please let me know.looking forward to the challenge.
Thanks for the help.

I see a number of familiar names. Huzzah! I am getting so excited for April!

I had signed up for this year's Challenge, but, for health reasons, I need to bow out. I don't know how to remove my blog from the list. Could one of you please do that for me? "Musings From a Part-Time Cyborg" at poppycockpublishing.com/tammyjrizzo. I'll miss this year's fun and festivities, but I simply can't do it this time around.

soooo exciting and what a GREAT team - thank you for all that you do! April is almost here - in anticipation, boldness, courage, daring, excitement, fear - and hopefully all the way to zest!

Thanks for all you do to keep the challenge running smoothly. This is my sixth year in the challenge, and I'm looking forward to it. My blog/writing seem to slump about the time March rolls around, and I've found the A-Z just the kick start it needs to revive.

Happy to 'meet' you all. I'm sure you're all dynamos like Damyanti.

Hi Guilie - so glad to see Damyanti's team up and running here ... even if you're doing the introductions for us! The A-Z is an amazing 'institution' .. and has been such fun - I've done the last five years .. now sixth .. I will definitely be seeing you all around .. cheers Hilary