The other co-hosts have introduced their team of assistants (a/k/a "minions"), so I guess I should introduce mine as well. 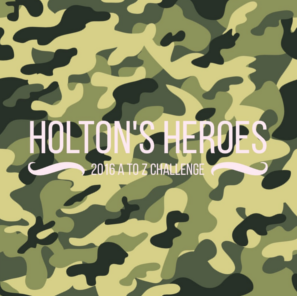 I asked each of them to write something about themselves, so here's what they had to say...

Dcrelief was born and raised in North Carolina has been blogging since 2006; celebrating ten years April 2016! Currently she maintains three blogs: dcrelief - Remove the Rose Colored Glasses, dcrelief - Battle of the bands (where I first met her), and An Artful Blogger (joke blog). Dixie is an artist, and paints and sketches portraits and landscapes, depending on a client's request, in acrylic, pastel, or charcoal. She does crafting and sewing, specializing in costume design or repair, shabby chic creations, and doll clothes.

Kimberley Cooper (Kim) is married, mid-fifties in age, and lives in the UK, sandwiched between the sea and the South Downs. She works part-time for a local charity and supports her father, who is in his eighties and frail. She's had a couple of short stories published in anthologies, which gives her the confidence to self publish, both short stories, a novella and a novel. There's a second novel on the go, 60,000 words through so far. She loves to read blogs, both on writing and those which give an insight into how other people live their lives.

Laura Roberts is a four-time A to Z Challenge participant (2016 marks #5!), and has published three of her April blog post collections as books. She is also a five-time NaNoWriMo winner and a 3-Day Novelist, and you can read more of her work -- or submit to her annual "Everything I Need to Know About Love I Learned From Pop Songs" anthology -- at Buttontapper.com.

Erica is a veteran with the Blogging from A to Z Challenge. She's been writing short stories and plays since 3rd grade and fell out of it in college. I started this blog to get back into writing. She tells us, "My writing style is rather dark and macabre. In my own opinion my writing style is very Edgar Allan Poe-ish/H.P. Lovecraft-ish." She's "super excited to be a part of the Holton’s Hero team. Every year I’ve participated in the challenge and have come across some pretty fantastic blogs and developed a few awesome virtual relationships. I’m looking forward to cheering ya’ll on and giving you virtual high fives. And I can’t wait to read your posts, get to know you and maybe, just maybe develop a blogger-to-blogger relationship. Sounds kinda creepy huh?"

Elizabeth Los says "My favorite fictional character: Sherlock Holmes - I'd sit next to the library shelves in the Summer and read for hours. My favorite movie is The Day The Earth Stood Still (1951). I play piano, flute and trumpet. I love Beethoven, Mozart, Rachmaninoff, but enjoy film scores by Zimmer, Doyle, Goldmith, Horner, Elfman, Morricone, etc, etc. I could listen for hours and still not get enough. :) Oh, and I write. I've published one novel and a few short stories. I'm currently working on a five book young adult series."

Linda G. Hill says she's first a mother of three wonderful boys, second, a novelist and blogger. She says "I write. I observe. And then I write some more. People and their behaviour fascinate me endlessly. I read. A lot. I love to learn." Linda runs a number of blog hops that I participate in, including Stream of Consciousness Saturday and One-Liner Wednesday.

Shan Jeniah Burton lives a passionately playful life filled with lovely chaos, intertwined with her chef husband and two endlessly fascinating homeschooled children who keep outgrowing their clothes. She is particularly fond of words and dreams, imagery and photography, travel, nature, history, music, and fictional people with green blood and pointed ears. I met her through A Round of Words in 80 Days.

Sneha Sasikumar proudly says she has three beautiful places in India to be called as home: one, the emerald Andaman and Nicobar Islands where she is born and brought up, two the Luscious Kerala which is where her ancestral roots are, and finally the Happening and cool Bangalore where she is settled for the past six years. Techie by profession, dancer by birth, Blogger and doodler by choice and in love with her three tattoos. Sneha lives life on her own terms and is always up to learn new things in life. She follows her heart but doesn't forget to carry the brains along :) When life throws lemons at her she turns it into a lemonade!!!

Michele Truhlik is a writer, blogger and small business entrepreneur. Previously an owner of an advertising agency and a bar, she currently has a dog-sitting business and a jewelry business and is much happier being out of the corporate world. She is also following her calling and is an Animal Chaplain and will be officially credentialed and ordained in 2017. She has been rescuing and adopting greyhounds since 1999 and has been owned by 8 greyhounds.

I'm very honored and grateful to have a group of assistants this talented, decicated, and easy to work with, and hope you'll visit their blogs and get to know them.
Posted by John Holton at 10:00 AM

What a fabulous crew you have. I am so impressed. I'll spend some time today checking everyone out.

I an new to A-Z. It seems you have a very creative and hard working crew.

Its Really Nice to know everyone

What a great team you have there, John!

Hi John - hope your wife is happy with your all women crew?! But I'm delighted your call to arms worked ... and it's great to have so much support ...

Good luck one and all - cheers Hilary

Now that's what I call a great team!
@dcrelief from
Remove the rose Colored glasses

dcrelief - Battle of the Bands

Great gang, John! And I love the name, too... Holton's Heroes. Catchy, simple, inspired. Off to meet & greet everyone :)
Guilie @ Life In Dogs


[@nananettie1969] from
Annette's place
I am glad that I am following already a few. I will visit the rest today. @nananettie1969 #atozchallenge

My daughter is a rabid, uh I mean avid, Hogan's Heroes fan and when I told her your team name she adored it!
Revisit the Tender Years with me during the #AtoZChallenge at Life & Faith in Caneyhead!

Yay! Now I can find all my fellow minions' blogs!
Thanks for the shout out, John. :D

Thanks John <3 Cheers to the team!!! Hip hip hurray:) All the best to everyone who is taking up the challenge and thanks a ton to all those who would be stopping by at our blogs. Happy Blogging !!! :)

Thanks for the intro John. It's nice to get to know my fellow minions. I'll look forward to the new friendships!

Good to read related articles more frequently to remember active participants who are helping in organizing the challenge more systematically. Visiting the Google+,FaceBook and Twitter accounts of the challenge gives the latest information of the event. I shall visit the sites of all mentioned in this article. NRao.
@knoltweet
NRao Blogs - 2016 A to Z Challenge Blog Posts
Management Theory Review

Hooray! Great to meet my fellow minions - looking forward to keeping the Linky nice and tidy with you ladies, and following all of your blogs. :)

Wow that's QUITE a team. I KNOW you'll do great at the challenge team, good luck!

Great intro. Nice to meet you all :D

Sounds like you have a great team. Good luck with all the hard work needed.