How to use the #atozchallenge to help your writing efforts

How to use the A to Z Challenge to help your writing efforts
Timothy S. Brannan, The Other Side

It is that time of year again. The holidays are done. The kids are all back in school. It is way too cold for yardwork or being outside so naturally our thoughts turn to writing.

Or maybe that is just me.

I think I will hear some notes of agreement from many of you when I say I am not sure what I would be doing if I couldn’t write.  It is what keeps me sane…if you consider listening to imaginary people in my head and writing down what they should be doing sane, then yes.

I write. I blog. The lines blur until it comes to the final product.  But honestly it doesn’t have too.
Allow me to take a step back.  I have been blogging now since about 2007, prior to that I maintained a website since about 1995 or so.  I have always had something to say.  I began blogging as a way to gather up my thoughts for the book I was working on at the time.  So for me there is a lot of harmony between “book” writing and “blogging” writing.  I first took part in the A to Z Challenge in 2011.  I made it my own goal to visit and comment on everyone’s blog.  My own efforts though were less focused, I posted what I wanted on that day.  Yeah. I was pretty busy in April of 2011.  For 2012 I went really crazy and blogged on a theme (which is in my opinion the best way to go) and I also posted on my other blog, The Freedom of Nonbelief with the A to Z of the atheists that had most influenced me.  Both of these were good and it was a lot of fun, but I was still really busy.

Last year though I hit on the magical recipe.  On my main blog I actually focused on something I was doing for my book writing and made the A to Z part of my research and rough draft cycle.

I write game books. That is books for Roleplaying Games. Think Dungeons & Dragons. Actually that is exactly what I was doing.  I began my blog as a sort of a “design journal” for my WIP “The Witch”.  As I went on I added another book, “Eldritch Witchery”.  So yes I write a lot about witches, magic and all that fun stuff.  Last year I did an A to Z of Demons.  This will all become part of my next book which I am currently working on the drafts.   This idea though really struck a chord with me.  Not only did I get my posts start and done sooner, I could use the feedback given by all my visitors to make edits in my document.  It went beyond the normal theme and into “theme with a purpose”.

I wasn’t sure if I was going to do the A to Z again this year.  I have new Kickstarter out for my next book on witches (and it is a huge manuscript) and that is taking up a lot of my time now.  Plus I didn’t get as far as I wanted on the demon book as I wanted.   But yet the material I got out of it last year is just too good NOT to do it again.

So this year I am once again doing my “Theme with a purpose”.  At present I have a few WIPs on my hard-drive. I am a freelancer and I use Kickstarter to help fund editing, art and layout so my projects are largely my own.  Top of my list is an A to Z of Vampires.  I have wanted to get a vampire book out for some time and it was almost my topic last year.

Here is my strategy:

As of the writing of this post there are almost 600 people signed up for the A to Z Challenge and about 20% of these self-label themselves with the Writing (WR) or Book (BO) labels.   So this is something they could certainly try and anyone could do it.

Doing the A to Z Challenge is a Challenge, but it doesn’t have to be a Chore.

About the Author
Timothy S. Brannan is the author of The Other Side blog, http://timbrannan.blogspot.com/
He is also the author of “The Ghosts of Albion RPG”, “The Witch”, “Eldritch Witchery” and the upcoming “Strange Brew” which is currently in a Kickstarter Campaign. Please stop by and see if this is something you would like to support.

Email ThisBlogThis!Share to TwitterShare to FacebookShare to Pinterest
Labels: #atozchallenge, Other Side, Timothy Brannan, writing

Blogging A to Z?: A Word from the Other Side

On January 6, 2012 Timothy Brannan from the blog The Other Side put forth a challenge to OSR/RPG bloggers (that's " Old-school Renascence /Role playing gamers) to consider doing the Blogging from A to Z April Challenge.   He presents valid reasons for doing the Challenge that would apply to all other bloggers as well.  This post is reprinted with Tim's permission.


Blogging A to Z?


Last year I proudly participated in the Blogging A to Z challenge in April.I felt it was not only a good way to stretch my creative abilities but work on my writing and do a bit a cross blog-genre promotion.  My hits went up, and stayed up, drastically during and after April and I got my greatest surge of followers.Well they are doing it again this year. 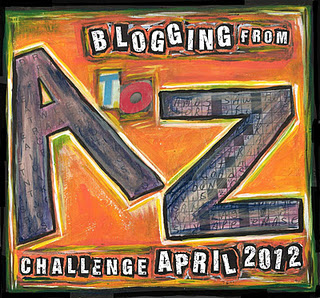 Artwork by Ada Zdanowicz
Though I am not sure I am going to do it this year yet or not.
Last year it worked out on many levels for me.  I recall thinking about the posts I had queued up and how they would fit the challenge.  When "Z" fell on a Saturday it clinched it for me.
Part of the purpose of the blogfest is to post every day.  I do that now anyway.
Keep in mind I am NOT saying participation is a bad idea, far from it in fact.
I actually suggest that we get MORE OSR/RPG bloggers participating to get our message out there.
The one thing we all talk about is getting more people involved in our hobby, we can't do that if the only people we talk to are already in our hobby.
Plus if you are selling a product you should participate just to attract more attention to you and your book or product.
If I do it this year then I need to do a theme or something, make it more challenging than last year.
Are you going to participate?  Why or why not?
Who's ready to accept Timothy Brannan's challenge?

Email ThisBlogThis!Share to TwitterShare to FacebookShare to Pinterest
Labels: The Other Side, Timothy Brannan
Older Posts Home
Subscribe to: Posts (Atom)