The Challenge Pays Off: Damyanti Biswas Got a Book Out of It

Here's an A to Z story from last year:  Damyanti Biswas took her posts from the Challenge and compiled them into a book.  For information on how to obtain A to Z Stories of Life and Death visit Damyanti at Daily (W)rite.   Here's what Damyanti had to say about the Blogging from A to Z April Challenge of 2011. 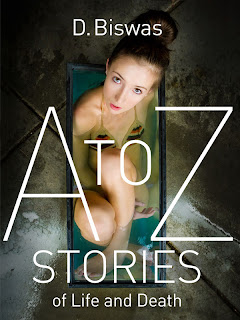 When I signed up for the A-Z challenge , I was the 15th participant. I had no idea of how big it was last year, and certainly no forewarning of how mammoth it would become this year.
The one thing I knew, however, was that it would be tough.
Tough for a blogger like me, that is. I’ve never really posted everyday despite the name and intention of the this blog , Daily (w)rite.
Before I started the challenge I didn’t know I would do all fiction, maybe fiction a day or two somewhere, but not All the posts!
But on an impulse I decided to ask for prompts for the challenge, based on which I would write flash pieces, and once I got the first few prompts and had written the first few pieces,  I knew it had to be fiction. Throughout. I was having way too much fun, and I love a good challenge.
Thanks to the comments that flooded/trickled in each day, I managed to hang in there and now have 24 flash pieces (I combined two letters, twice). It did take a bit of courage, to write a new piece and send it out into the world each day, but it also gave me a lot of confidence.
I know most of the comments were kind for the sake of kindness, but even I can’t deny that some of the commenters on some of the posts seem to have really liked the stories, and meant every word of what they said.
I hope to do a collection of these, in an e-book format, and Arlee Bird  and a few others think it might be a good idea. I’ll cull some of the stories, which did not work, to my mind, and replace them with others I’ve written before or will write afresh.
As to visiting other blogs, I have to admit I did not visit all the blogs that participated. I knew I couldn’t do it and go on with my normal life, which is a little crazy at the moment, with a new home and a host of other things.
So I visited all the the posts at #atozchallenge on Twitter, created a Twitter newspaper of links. I visited, or tried my very best to visit, everyone who visited and commented. I visited others from the links on the comments they left on blogs I was already visiting.   I must have visited at least 30 blogs each day.
I’ll do a separate post for tomorrow, to especially thank all those who commented on my A-Z posts and to mention some of the A-Z posts/ blogs I really liked. (this post is included below)
For today I want to thank the organisers:
Arlee Bird (Tossing It Out) ,
Jeffrey Beesler’s (World of the Scribe),
Alex J. Cavanaugh (Alex J. Cavanaugh) ,
Jen Daiker ( Unedited),
Candace Ganger (The Misadventures in Candyland) ,
Karen J Gowen  (Coming Down the Mountain) ,
Talli Roland ,
Stephen Tremp (Breakthrough Blogs )
The challenge increased the number of people who subscribe to my blog, the number of visits and commenters.
But the best thing it did was give me a shot in the arm, that I could produce fiction somewhat consistently, some of it  not half bad.
So, Thank You to all the organisers, and hope to take part in the A-Z again next year!

April has been the A-Z challenge month for me. I invested quite a bit of myself in it, and like I said in my yesterday’s Reflection post, I have the organizers to thank for giving my muse a huge boost.
But I also need  to thank some of the most consistent and kind commenters on my A-Z posts, without whom I would have fizzled out about halfway down the challenge. They provided extraordinary word-prompts for my flash pieces, and were unfailing in their generous support.
So, here goes, in no particular order:
Marian Allen : She sent me some lovely prompts, and made some super-awesome comments!
Petra Hefner : I loved her positive posts and her equally positive comments.
Nutschell: Another blogger whose posts made an impression on me, and who always left me exciting comments.
Nicole/MadlabPost :  Always patient and kind on twitter and on the blog. I’m so happy to have met a blog-friend like her.
Dafeenah: A genuine, emotional  writer, and a generous commenter.
Bornstoryteller: He wrote an entire story in the A-Z challenge. And I have seldom had a more encouraging and consistent commenter.
PencilGirl : Every blog should have a commenter like her, for the sheer number of smilies and the genuine warmth of feeling

Patricia : Her first A-Z post floored me, and we have been in touch on blog and twitter ever since.
Christina Majaski : She is a straightforward girl with an awesome blogging voice, which is why her admiring comments meant so much more.
Joy : I don’t know if Joy remembers, but we used to visit each other’s blog two years ago when this blog was new, and have now re-connected thru A-Z. She has been very very generous with both her prompts and comments.
Corinne O’Flynn : I found her via the #atozchallenge via twitter, and have loved interacting with her on the blog and twitter.
Claire Goverts : I used a great many of Claire’s prompts and can never thank her enough. She is ever so sweet on twitter too.
Anna Tan: She wrote fiction for the A-Z, and lovely to talk to, both on my blog and twitter.
Talli Roland: One firecracker of a woman, who is all fun and laughter, yet also a fount of support and kindness….a prolific commenter and a joy on twitter.
India Drummond: I don’t know how she coped with A-Z despite going on a blog tour and sundry other things in April, but she did. She even found time to comment on my posts.
Alex and Lee: I met them via A-Z, and remain in awe of how they took the time to stop by my blog. Often. Despite organizing the challenge. Amazing.
I’m sure I’m missing out others who I need to thank, but I’m racing this post close to midnight and hope to make up for my errors by next week….I’ll visit and personally thank as many people as I can.
A few non-A-Z bloggers who used to be my friends before and supported me through A-Z:
Gladys Hobson : When Gladys comments, it makes my day. She cheered me on through much of A-Z, and I love her for that.
Indigo: An amazing writer who edits as a profession, and one of my oldest blog-friends—one I’m proud to have. She read and commented on my A-Z posts when she wasn’t doing so well.
Bronxboy55: If you mean to read one new blog this year and stop, make it this one. Awesome writer, humanitarian, humorist. His comments made the difference between posting and not posting on A-Z a few times, just at the points I was about to give up.
Thanks to each and every one of the bloggers mentioned above, and to all the others who visited, and took the time to comment. I’m grateful.
As I said yesterday, I’m going to work on an e-book, a Kindle short  (if research confirms it is the best fit for such a small book) based on the flash pieces I did on the A-Z. I haven’t decided on a title yet, and need to edit, cull out and sort all the pieces  before I can call it a manuscript.
It would be an interesting experiment, because the manuscript would be very  short, and not very suitable for traditional publication.
We’ll see.
Hope to receive words of advice from any and all A-Zers who have followed my work through the challenge.
Signing off on my last official A-Z post, till next April! Happy blogging, everyone.
Thank you Damyanti for being a part of the 2011 Challenge and congratulations on the book. We're looking forward to what you come up with in 2012.

Email ThisBlogThis!Share to TwitterShare to FacebookShare to Pinterest
Labels: A to Z Stories of Life and Death, Blogging from A to Z April Challenge, D Biswas, Damyanti

So pleased the Challange worked out for you. I was the first to sihn up on the first challenge didn't know what I was letting myself in for, but it was the best bit of blogging I ever did.
Look forward to seeing you in April.
Yvonne.

The A-Z Stories Of Life And Death is an amazing collection!
Well done Damyanti! I can't wait to see what you have in store for April 2012.

And she created a book out of the experience!

And what a result, Damyanti! The collection is brilliant, I love it and cannot promote it enough. I'm definitely signing up for next year :)

Hi Damyanti .. great that you're going to put your stories into an ebook ..

Not sure I understand the Twitter newspaper bit - but that's because I don't 'do' Twitter .. but it sounds an interesting approach and I'll try and remember it and find out more.

Good luck with 2012 and look forward to seeing you there - a Merry Christmas time and Happy New Year .. cheers Hilary

I've been considering writing fictional A to Z pieces this year, and your post has expired me and made me think I can actually do it. Last year I was putting myself out there just by virtue of letting people know I existed; this year it may be because I'm putting my fiction out there.