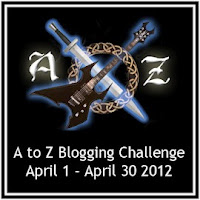 Oh please bore us with that story! :)

Good hearing more about Jamie. I haven't listened to much of the much you do, Jamie, but what I've heard sounded pretty good.

Woo! This is an awesome page, for starters. And Jamie, assassins rule, baby! Well, mages do to in a I'ma-gonna-kill-you-from-as-far-away-as-possible sort of way. ;) Right on and awesome theme. I'm going to check out that Under the Grey Banner!

I would like to be bored with that story too. ;)

That's so cool about studying Egyptology.

I'd love to hear the story too! That's awesome you got to go to Egypt and uncover a tomb. Once upon a time, I wanted to be an Egyptologist. It's fascinating.

I don't think I read every one of Jamie's posts, but I read most of them, and they were definitely awesome.

"There's a long story involving beer, a jacuzzi, grenades, a 7 day ban from Egypt and a schizophrenic geologist, but I don't want to bore the readers with that."

A seven day ban from Egypt? How can that be a boring story? Congrats on the engagement.

Alex, you used the expression 'wicked cool' which leads me to believe that you are in the Massachusetts/New England area? You don't hear that much outside this region, and it's unknown on the west coast except by New England transplants. :)

Oh go on, tell us the boring, beer, ban and baby bomb story.

I know nothing about metal although I like sci fi. Maybe your fiancé can convert you to some of the music she likes.

Congrats on the engagement.

JoJO, I'm a military brat, so I've lived all over the world, but ironically never in that area. No idea where I picked up the phrase.

Jamie, you might have to bore people with that story some day!

I'm major jealous of your Egypt adventures! What fun to find a burial chamber...

First into a burial chamber? Banned from Egypt? You can bore me anytime. ;) I loved your posts as I had never listened to these bands before. You have really cool taste.

Jamie, I so love a boring mummy attempt story! I know someday you will bring it~ My son is sooo into Skyrim.
I was the big sister that use to take my brother shopping for D&D stuff.

Banned from Egypt...sounds like a great title for a book! ;D or maybe
Band from Egypt?! Fun interview!

Thanks for interviewing me, Alex!

Ha, I think I opened up a can of worms with that story! Maybe I'll reveal the full tale .... one day.

Enjoyed the interview! Glad you shared it with us. :)

Mr. Jamie, great job on the challenge! Things sound pretty exciting in your life! Best of luck in your next endeavors!

"beer, a jacuzzi, grenades, a 7 day ban from Egypt and a schizophrenic geologist"--wait, wait, what? You have to tell us this story! :) LOL.

Great interview! It was fun to learn more about you, Jamie.

1. I love everything about this interview. The interviewer, the interviewee, the questions, the answers. Yup.

2. Man, I have *got* to go back and read the archive of Jamie's 2012 A-Z. I need some new metal. I never listen to metal except when I'm writing, which is a pretty good argument for me listening to metal quite a lot. But it's mostly on Pandora so I don't actually know that much about it. It's just weirdly good to write to.

3. I never got a chance to get into D&D either, although I always suspected I would totally love it if I tried it.

Fab interview. I never played D&D either, but I also love playing mages in games hehehe. Love those fire balls. ;)

I have to admit, I didn't know this genre existed ;) Thanks for sharing. Loved the story about the burial chamber - wow! talk about inspiration!

Alex, I love how you share your treasured finds with us. Jamie - best story teaser I've read in a long time. Now write the tale and let us know when it's posted. Otherwise I'll find some zombies from one of my boys' video games and send them to harass you until you do. And then Ezio will come and if you still haven't written it, I will send a dragon born warrior from Skyrim (my fave game) to hunt you down. Btw, I don't PLAY any of these. But u live to watch my boys (12 and 15) play.
Tina @ Life is Good

Soooo coooool that you got to help uncover a burial chamber! I want to see those pics some day! Think they are blog-worthy?

And congratulations on your engagement!

Ooh, archaeology? I might need to ask you a few questions for my shiny new idea...