For Potential Joiners: What is #atozchallenge about? #blogchat 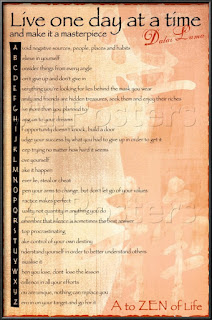 For those of us who have been part of the A to Z Challenge with Arlee Bird  or Lee and the rest of the team, this challenge needs no introduction.

Lately, I've seen quite a bit of interest about the challenge on Twitter and Facebook tho, so I'll quote an explanation of the A to Z challenge from Lee, who founded it:

Most of the time if you subtract Sundays from April, you then have 26 days--one day for each letter of the alphabet.  When April 1st lands on a Sunday you begin on that day which will be the only Sunday you would post during that month's challenge.


Using this premise, you would start beginning April First with a topic themed on something with the letterA, then on April second another topic with the letter B as the theme, and so on until you finish on April thirtieth with the theme based on the letter Z.  It doesn't even have to be a word--it can be a proper noun, the letter used as a symbol, or the letter itself.  The theme of the day is the letter scheduled for that day.
Most of you are probably familiar with Sue Grafton and her best selling series of detective novels known as the "Alphabet Series" that started in 1982 with "A" Is For Alibi up to her most recent "V" Is For Vengeance".   She has made a franchise with the series and there have been  other authors who have taken similar approaches.  This Blogging From A to Z Challenge will be in the same vein.

So, for those of us on #blogchat here's a good challenge to bookmark for April 2013-- it welcomes diverse topics from parenting to quilting to gardening and writing, and a whole gamut of subjects in between. I can personally say that it helped my blog and twitter to be part of this challenge, not to mention the hordes of blog-friends I made, and the e-book I published.

So, if you're looking to boost your blog, keep Blogging From A to Z Challenge in your schedule and follow @AprilA2Z on twitter (and this site, of course) , for updates!
Posted by Unknown at 11:40 AM

Email ThisBlogThis!Share to TwitterShare to FacebookShare to Pinterest
Labels: #atozchallenge, A to Z, A to Z blogfest, a to z challenge, a-to-z challenge

Doing A to Z this year proved a boon to my blog as well. I've made some cool friendships with fellow bloggers and have learned so much about blogging, from both the A to Z hosts, who so generously shared there knowledge, and the other participants. The work I had to do to be successful at A to Z helped me develop my blogging practices further, which was le awesome (for me, at any rate - readers of my blog may disagree). ;-)

It definitely was challenging, though, and by the time we neared the end of the alphabet I did suffer from blog fatigue. But, IMO, the benefits of doing A to Z outweigh the negatives. I'm somewhat on the fence about participating next year...which is odd, as I've already decided on a theme and have plugged in topics for some letters. Hmmm... :-)
Some Dark Romantic

Hi Damyanti and Lee - great explanatory post ... and I love the A - Z: I enjoyed having a theme and being as succinct as I could be - probably not sufficiently .. but definitely shorter than normal. Posting for the 26 days was interesting .. and I loved being creative with one or two of the letters ..

... and as you say - you do meet some amazing and amazingly supportive bloggers - it's a great community.

Probably the most difficult thing was to understand that we're not superhuman and we can only do so much .... so filtering out blogs that hold no interest was essential ..

... and the checking out the 5 blogs above your own - seemed a very sensible thought ... yet some of those needed to be let out of the hopper ... the challenge between being polite and practical - practical won for me.

The Challenge made a huge difference in my blogging the very first year which is why I'm a big supporter.

Participating in the challenge the first year was the kick in the rear I needed at that time. It worked. Being invited to co-host was such an honor I could hardly stand it. Co-hosting has opened up my blogging experience in ways I'm still discovering. For me, the absolute best part is the new friends I've made. Friends for life among the co-hosts, and lots of new friends with the participants. I absolutely adore the almost daily email conversations with my buds. They cheer me up, they make me laugh, we share our struggles and our lives and it's much deeper than fb or other social media. We KNOW each other.
Join us. What do you have to lose?
Tina @ Life is Good

The event is getting so well established that it's a good idea to start planning well in advance.

I loved the challenge. It went places I did not intend, but I was proud and happy at the end of April! I met quite a few fu new friends as well!

I am already planing my "random" A to Z posts!

And I just dropped out. I've never done the challenge before, but too many commitments -- I can't do them all justice. I will read and follow, the topics are awesome!