Please join me in welcoming Ninja Captain Alex's friend, David Black. Alex participated in David's  previous blogfest celebrating the years 2000 to 2009 (The Noughties...tee hee) and recommends that we join David's next party. I for sure am in! Sounds like lots of fun, and remember, you always meet new people when you join a party!

Nostalgia is a funny thing. We look back and time concertinas so that objects in your rear view mirror appear closer than they are. We are all a product of our past and sometimes popular culture is the only tie that bind. Last year I ran The Noughties Blogfest. I had written Review-Of-The-Year type posts of my favourite Films/TV/Music/Books/Comics etc from the years 2009 to 2000 and invited people to suggest their own favourite things from each year of the decade.

Now I've almost finished writing about the Nineties as well. So I would like to take this opportunity to invite you all to join in with The Nineties Blogfest on the 15th of October. 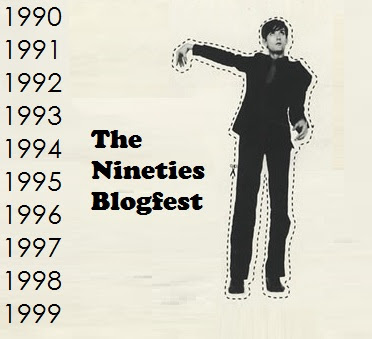 Choose one thing from each year from 1990 to 1999, be it a film, a TV show, a radio show, a particular episode of a TV or radio show, a piece of theatre, a book, a comic, a song, an album, a gig, a piece of artwork, something online or something else entirely, and then tell us what you love about it.

Now head on over to his house and sign up!  Tell 'em Tina and Alex sent you.
Posted by Tina at 3:00 PM

His last blogfest was a blast!

Thanks Alex. I'm glad you had fun.

ooh tempting to do something music or movie related. could be really fun!

I guess I'll opt out of this one. All I can remember of the 90's is working a lot and taking care of my kids.

i am so thinking of something... i really enjoyed last years too.

I look forward to reading what everyone posts for the blogfest.

Stephsco, go on be tempted.

[Retro-Zombie], I glad had enjoyed last year's, here's hoping we can have even more fun this time around.

Susanne, will you be joining us?

Like I said, I'm so in. Thanks again for guesting.
Tina @ Life is Good

Yes,I read the info, and yes I have a question...one post for all ten years?

Well 1990-1995 are a blur of Grateful Dead shows and political activism in San Francisco so I can't really remember anything too specifically... and nothing as it would relate to the general population....

This sounds like heaps of fun. I was in high school for most of the 90's so would be happy to revisit my youth! :-)

Tina, you're very welcome. Thanks for joining in.

Andrea, it's entirely up to you, but that's what I'd do.

JoJo, I'd read it, it sounds fascinating.

Cally, me too. I'm not sure if it makes it easier or more difficult.