Today’s guest is one of my very best friends on the Internet and an incredibly talented writer and artist – Rusty Webb! He attacked the A to Z Challenge in a truly ambitious manner, showing no fear (or very little) as the month progressed. Rusty posted a new illustration for every letter. Brave man! Obviously I had to question his sanity…

What made you decide to do an illustration a day for the Challenge? Glutton for punishment or did you lose a bet?

It felt like I lost a bet! My real thought was that I didn’t want to ask so many people to stop by every day of the month and offer them something similar to what they were getting elsewhere, and probably by people doing it better. So I hoped it would be nice, unique, and most importantly, quick for the reader. 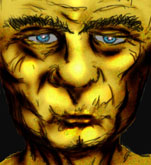 Which image was the most challenging?

Well, the early ones were tough because I was somewhat out of practice drawing, and on top of that, I had this tablet that I never really used because I found it awkward. I didn’t want to sketch on paper because I had this awesome tablet, but I didn’t want to use the tablet because it was hard for me to get comfortable with it. Anyway, I promised myself I would get acquainted with it no matter what. Which is why you see a much more deliberate use of color as the month progresses. I was getting more comfortable and able express myself a bit more freely.

All that being said, I really struggled with ‘G,’ and is still the one I was least happy with. It wasn’t right, not at all. And I think I spent more time with that one than any other.

I thought the sketch of Ish was awesome. Which one was your favorite?

I thought Ish turned out pretty well too, at that point I was beginning to get a bit of confidence in what I was doing. But I still think I like the old man from ‘O’ the best. I love drawing faces, and older faces are really interesting. But since I wasn’t using a reference I found it hard to do an older person, jaw bones atrophy, skin sags, wrinkles form, noses get big… it can be hard to get all that right. People are really good at noticing a face that isn’t done right. I ended up being happy with that one.

Tell everyone about your inspiration for M!

Heavy Metal Parking Lot? Well, it’s this amazing 20 minute documentary done in the parking lot before a Judas Priest concert sometime in the mid-eighties. Everyone who wants to see what being a guy who liked heavy metal was like during that time… well, there you go. I was just starting to really get into metal at that time and had begun attending rock concerts. It’s like a bizarre time machine for me to look back at that. That was me, that was my friends, that was my life (not really, but you get the idea).

Really, it’s probably a lament for my lost youth. It goes by so quick. But for 20 minutes while I watch I’m there all over again. I’m a kid. Great stuff. And who better than Bevis and Butthead to celebrate all that?

You’ve done covers for other authors, including Andrew Leon, and a publisher as well – do you enjoy working with someone else’s vision? Or does that make it more difficult?

Honestly, it’s tougher than I thought it would be. Much of it is communication. Me not understanding what the author (or publisher) wants and then giving them something that neither one of us really likes as a result. When I’m working with someone else’s vision it can take a lot of back and forth to get something right. And even then, after several rounds of back and forth we still might not be on the same page.I’ve lost my cool once or twice in private due to my frustration.The good thing is that everyone I’ve worked with has been so great. I wouldn’t trade some of the relationships I’ve built doing these covers for anything.

But I don’t really solicit my services for cover art to anyone nowadays. I have friends and acquaintances I will do covers for either as favors,or in exchange for services, like editing or critiquing, or because I’m anxious to prove something to myself. But I’d have to charge a lot of money to make it feel like it was worth the effort.

You did the cover for your own book, A Dead God’s Wrath. (Awesome book!) Tell us a little bit about the book.

A couple of years ago I wrote a novel. I really liked it, but thought it was a bit rough around the edges and needed some work.So I set it aside to work on other projects. However, for that novel I created a backstory of a secret war that has been fought on earth for thousands of years over some alien artifacts. I decided it would be great to expand on the backstory through stand-alone shorter works, like A Dead God’s Wrath. I had this vision of interconnected stories that can be read in any order and enjoyed, but when put together paint a much larger picture. In this story, a young man in the late 19th century discovers his beloved has been kidnapped by some local thugs for ransom, but he slowly comes to realize something much larger, and stranger, than what he imagined is taking place beneath the surface. To date, I’ve already written the aforementioned novel, two other novelettes, two short stories and a short novel in the same universe (and plan on writing one, very long novel). I hope to have the short novel released this fall as soon as I get revisions and editing done on it.The rest I’ll get to as soon as I can.

You write, you draw, you play guitar – what else do you do creatively? Basket weaving? Yak herding?

Ha! I’m cursed with the desire to do more than I’m capable. It’s really hard to excel at multiple disciplines, gaining mastery over anything requires undivided attention. Over the past decade I’ve had to make some tough decisions about how I spend my time. I’ve given up acting, amateur astronomy, music, and photography in order to focus more on the things I feel like I can’t live without. In this case, writing, followed by the occasional art project. If I ever win the lottery though, watch out, I’m picking them all back up.

If you do the Challenge again next year, what theme would you consider? (Safe bet it won’t be illustrations, right?)

I don’t know. If I’d planned for the sketch-a-day theme in advance then it probably wouldn’t have been so bad. But I made my decision to do a sketch-a-day on the day before the blogfest began. During the month,I was literally sketching things at eleven o’clock at night in order to post the next day. Or on a few occasions, I was calling in to work to tell them I would be late because I had nothing and I needed an hour or so to whip something up before I started my day. The effort took so much out of me that I went down to posting about once a week after. But it was one of the best experiences I’ve ever had blogging. I wouldn’t be surprised if I feel ambitious again come the spring. So, maybe I’d do something similar. Or maybe I’d do A-Z caricitures of blogger buddies.

The one you did of me last year is awesome, so I’m all for that theme! Rock on, Rusty – you’re one cool and talented dude.

Email ThisBlogThis!Share to TwitterShare to FacebookShare to Pinterest
Labels: A Dead God's Wrath, a to z challenge, Rusty Webb, The Blutonian Death Egg

It was certainly very ambitious. i'd assumed Rusty had done the drawings in advance. Now I realise he's even crazier than I thought!

Thanks for doing the interview, Rusty - you rock!

He did those last minute? Very impressive.

Thanks a ton for doing the interview Alex, it was an honor.

And Mooderino - doing them in advance, yes, that would have been so much smarter

Diane - all last minute. Well, now that I think about it, I did do most of the very first week on a single Saturday afternoon, but after that they were being done the day before, or day of.

Interesting interview. Caricatures of blogger buddies for the theme of next year's A to Z Challenge would be so cool.

The sketch a day was a really interesting interpretation for the a-z theme. Bravo, Rusty.

Terrific interview. I love how if you win the lottery you're going to pick everything back up again. Here's hoping you win. :)

I loved of all of your sketches, even though I don't think I left a comment on each one. My favorite was Universal translator. Made me smile all day. You are an amazing artist. :)

That is so cool that you did an illustration a day. What a lot of work!

Rusty, your artwork was fantastic! And that's so cool about the world of A Dead God's Wrath being expanded upon in other stories.

Speaking of being on the same page... Actually, I hope I'm easy to work with and that I haven't been the cause of any breakdowns.

Congrats to you on an illustration a day, and they look really great.

It was really impressive to see new illustrations every day of the challenge. It was certainly something no one else was doing! (At least that I saw.)

I loved seeing your art everyday, Rusty. It's awesome.

Susanne - It would be cool. I've thought about it some more since I said that.... Can't decide if it'd be doable for me or not

PT - Thanks for the compliment

Melissa - I loved that one too! Not as much as the old man, but still, I really liked it. I think it was mostly because I struggle so much to make a straight lines - and those were pretty straight.

Sherry - it really was

Cherie - Thanks! I just hope I can make future stories something that folks will want to read.

Andrew - not you, although The House on the Corner was really tough, I ended up being pretty happy we kept at it until it was right.

Golden - Wow. Glad you liked it. I did know of one other person that sorta did it. I think they skipped a few days though.

MPax - thanks! It was a joy seeing you stop by daily too.

Its great to get to know Rusty a little better. He's one talented guy. Now we know what Beavis and Butthead look like all grown up.

I always enjoy these features, Alex. It's so nice to get to know someone new, and Rusty, I'm amazed by your talent. Also, know I know where the guitar guy came from in Alex's sidebar!
Tina @ Life is Good
http://kmdlifeisgood.blogspot.com/

Rusty your art is amazing!
What about taking the characters from the past A-Z and give them a comic strip! ;D It would be cool....
You do rock! Okay, pick your favorites..no G~ lol