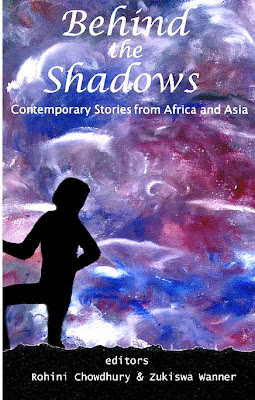 Two years ago, in the London Book Fair, two acclaimed authors, Rohini Chowdhury from India, and Zukiswa Wanner from South Africa met up, and over lunches, and dinners and reading each others' work, bonded, and discovered common ground.


Today, Behind the Shadows is being released worldwide on Amazon, and the editors are here in an interview, to talk about how a random meeting led to mutual respect, a long association, a beautiful friendship, and a roller-coaster ride which led up to this collection.

1. What inspired you to conceive of and edit Behind the Shadows? 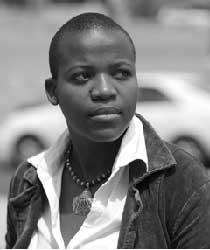 ZW: Rohini and I first met at LBF 2010 through a Britsh Council organised meeting matching a South African writer to a writer to an English writer. Then they sent us an email introducing us and I thought, hold on, Rohini doesn't even minutely sound like blue-eyed, blonde-haired Anglo-Saxon but I figured if Mandela could have admired Gandhi, I'd probably have  fun with Chowdhury. So we met at the hotel where I was staying. And she went away with one of my novels to read. And then I went to her house for lunch and left with a few of her books. We both admired each other's literary style. And really liked each other as people and we had so many similar experiences despite our different backgrounds. We decided we were the Gandhi and Mandela of literature but we had to collaborate in order to make it work (I mention Gandhi and Mandela for absolutely no reason at all than to increase e-book sales). 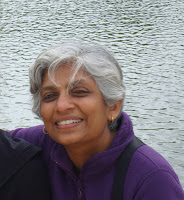 RC: It was one of those mornings when the world seems perfect, so when I received an email asking if I would be happy to buddy a South African writer for the forthcoming London Book Fair, I agreed! Later, of course, I had the shivers, and spent a sleepless night wondering who would show up! So when I received Zukiswa's email id, I wrote a very polite, very formal email to her. I was blown away by her reply, which was the most cheerful, bubbly, friendly email I had ever received from a stranger. And so began a wonderful friendship. We thought of collaborating on a novel, maybe write different sections, because our styles would complement each other beautifully, we thought of putting together a collection of our own short stories, and then one day it came to us - we'll do an anthology that would bring Africa and Asia together!

As to the theme, both of us have a strong sense of right and wrong and we have both seen suffering and injustice up close and sometimes personal. We have seen it affect people all over the world, regardless of class or color or creed. What's more, we felt it was particularly relevant for Africa and Asia, who share a history of colonial misrule, and who are, despite economic development, still suffering the fallout.

ZW: The experience has been phenomenal.  If I ever have to do another collaboration on anything literary again, it would have to be with Ro or someone like her (her daughters for instance. They are like her). We respect each other enough as writers and editors so we would discuss our selection without arguing and generally we both enjoyed more or less the same stories when we were selecting. We had a few interesting experiences with established writers who had submitted mediocre work and when we rejected their short stories, they were very miffed and wanted to know 'what exactly did you not like about my story' and what our criteria for selection was, and didn't we know who they were...blah blah blah.

RC: Yes, those were some of the aggravating moments, when writers whose stories were rejected attacked us with email after email. I remember having to deal with some very persistent ones. Thankfully, it was Zuki by my side, with her ready humor and her ability to laugh at all the foolishness. I tend to get hassled, but Zuki would always restore perspective. I have worked - or tried to work - on other collaborative projects. But I have to say that working with Zuki has been the best. Mutual respect, and an intuitive understanding of each  other went a long way in making this such a happy experience. During this project, there were times when one of us would become extremely busy. The other picked up the slack easily and naturally. Zuki is right, if I ever do another collaboration, it would have to be with Zuki (there isn't another like her!)

3. What is your advice to new writers hoping to get their work published?

ZW: Read well to write well. Whether it's a short story or a novel, a new writer who reads more generally tends to be a better writer that one who does not and one can tell from their stories.

RC: Be very demanding of yourself. Criticize your own work ruthlessly, and never hesitate to rewrite. Be open to constructive criticism. Also, a trick that works for me - show your story to someone you trust before you go live with it. This may not work for every writer, though. I am just very, very lucky that I have two brilliant editors in my daughters who read everything I write before ever a professional editor sees my work. They don't hesitate to tell me what sucks, and what is even better, they give me strategies to fix it. :)

4. Did you find a personal resonance with any of the stories in the collection? A scene or description that reminded you of something similar in your own lives? 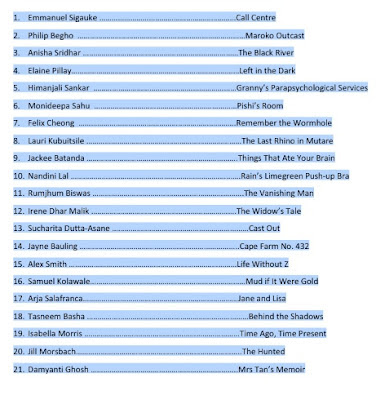 ZW: I liked all the short stories (that is why I co-selected them for the collection). The title story made both Ro and I cry. I remember chatting with her after reading and she had just finished reading it too and we were both sobbing. Rain's Lime Green Push Up Bra and call Centre addressed prejudices very well but without being preachy. Remember the Wormhole was very innovative in its story telling as Wiki page. I think as Rohini said before, the beauty of the collection was that in reading them we experienced a shared humanity.

RC: Yes, I remember that evening too. We were in tears after that story, but ended the conversation on a high note because we had found such a lovely piece for the collection. For me, Pishi's Room was very evocative of my childhood in Calcutta. Cape Farm No 432 brought back dark memories  - gangs of lepers who used to sometimes roam the streets of Calcutta, ringing a bell to warn people off, and begging for food and money. I used to be frightened of them as a child; with Cape Farm I saw their heartbreak.

5. Who is the target audience for this collection, and what genre would the stories fall under?

ZW: The target audience, because of some profanities and some experiences, would be adults. I am not sure I would push it under a genre.

6. Why would you recommend that readers download Behind the Shadows?

ZW: Because its a really really awesome collection and I would buy it too if I had not edited it.

Behind the Shadows is now available on Amazon, so I'd urge you to grab a copy, because that would push it higher in the rankings, making it visible to a larger audience worldwide, an audience it richly deserves due to the depth of human emotion and variety of voices it carries in its pages.

I have a story in the collection, but that's not the only reason for my requesting you guys to buy it. I'm reading the book now, and some of the stories are indeed moving enough that I have to put my Kindle down and breathe.

Zukiswa Wanner is the author of three critically-acclaimed novels and her latest novel, Men of the South was shortlisted for Commonwealth Prize for Best Book Africa region. She is the co- author of the Mandela house biography 8115: A Prisoner’s House with award-winning photographer Alf Kumalo. She has also written widely for international and African newspapers, journals, and magazines.

This interview brought to you by Damyanti @Amlokiblogs

Enjoyed the read, I found very interesting. Thanks for your hard work in compiling.

Very fortunate the two of you met!

How wonderful to meet such a perfect for you friend! Looking forward to reading the collection, and heading over to Amazon now.
Tina @ Life is Good
http://kmdlifeisgood.blogspot.com/

Hi Zuki and Rohini .. great to meet you and glad I was calling in and found you - I'll be back to read the post thoroughly ..

So interesting ... what a fascinating tie up ...

This sounds like a great collaborative product. When I was younger I used to buy a lot of short story anthologies. I don't read the shorts like I used to and probably should. It was good to hear the story of how this book came to be.

Ooo! I'll have to get this book. Great to meet both of you.

Thanks for sharing the story behind this wonderful anthology. Look forward to reading and enjoying the stories

Thanks Lee and Mary.

Really enjoyed reading about what happened behind the scenes, and how our editors feel about the book:)

The way these two authors came together as strangers from different parts of the world, developed a friendship, and decided to work together is a beautiful story in and of itself.