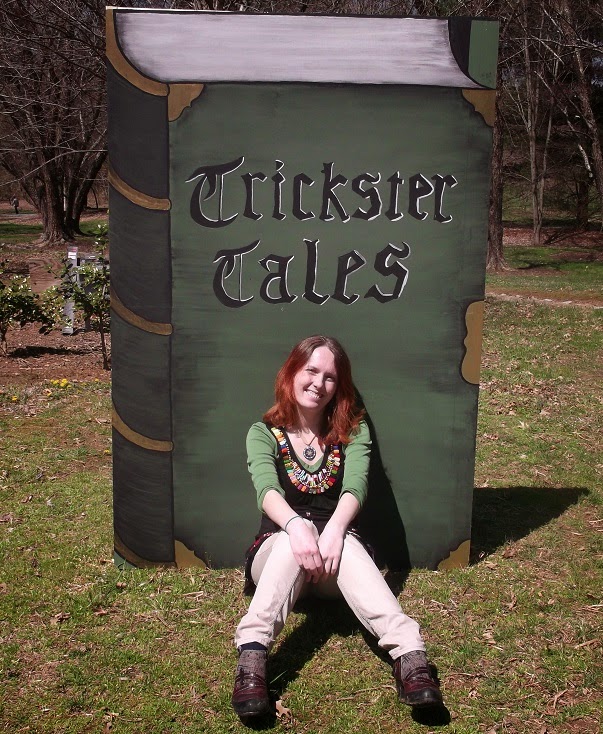 Welcome back to the Storytelling Series! After introducing  some of the world's most popular trickster characters, and some of their modern counterparts in TV and film, today I'll be talking about writing Tricksters in your own work.
So, why have a Trickster in a story in the first place? If you ask me: Because out of all the possible characters a storyteller works with, none surpasses them in popularity. They have their own fan base. They exist in all cultures, past and present. They work with all ages, and they add color, humor and wit to any story they wander into. (In my guest post over at Damyanti's wonderful blog, I talked about writing mythic fiction. It is an increasingly popular genre, especially in the YA circuit, and the home turf of such characters. But Tricksters are not limited to mythic fiction, or even to the supernatural; an everyday human can be a Trickster too.)
One thing they are not: They are not easy to write. The following list of Tricksteristics is a quick-and-dirty guide to some of the typical aspects of a trickster character. Here we go.

1. Trickster is morally ambiguous.
Trickster can fill the role of hero or villain in a story, but really, they are neither. Most often, they are the laughing third party. They have their own code. They can and will play (and cheat) both sides.

2. Trickster is smart.
The main power of such a character is always their wits. Some of them are also very fast and very strong, but first an foremost, always clever.

3. Trickster is never infallible.
In direct contradiction with the previous point: Trickster makes mistakes, and gets into trouble for them. They are genius and foolish at the same time. They talk themselves into a hole, and then scramble to get out.

4. Trickster has a special relationship with food.
Tricksters eat a lot, and would do a lot of things for food. Other sensory pleasures are similarly important.

5. Trickster has a thing for the underdog.
Tricksters are smart, and some of them are really powerful, but they don't generally prey on the weak. It is very, very rare for a Trickster character to hurt a child, for example. They sometimes go out of their way to help out the helpless. Not always for free, mind you.

7. Trickster breaks rules because they are there.
Even if they know they will get into trouble for it, rules are just so very tempting. Tricksters love breaking them, most of the time just to see if they can get away with it.

8. Trickster can be male or female, but in either form, will not be contained.
Tricksters are not gender-specific; while male and female tricksters sometimes operate differently, they all have the same basic nature. They hate being restricted in any shape or form. They expect to be entertained, and they always do the unexpected.

This, obviously, doesn't mean every story needs a Trickster. But if you are so inclined, and decide to write one, I hope you find this list somewhat helpful.
See you in two weeks!

As usual, you can find Csenge (@TarkabarkaHolgy) at:
The Multicolored Diary - Adventures in Storytelling (this week: Books that should be more popular in the USA)
MopDog - The crazy thing about Hungarians... (this week: Crash course in creative cursing)

Posted by A Tarkabarka Hölgy at 8:00 AM

AWESOME! Is Loki what you would call a trickster? jean

I am rubbish at this sort of thing which is why I stick with writing a simple diary of country life in the Shropshire hills.

Useful tips, all of them! Great tips, Csenge :)

Tricksteristics - I must say that I DO love this word!
Thanks for sharing!

Amazingly helpful list! Goes so well with what you wrote last time. Might have to give a character sketch a try here...
Tina @ Life is Good
On the Open Road! @ Join us for the 4th Annual Post-Challenge Road Trip!

Love this list. Maybe I should make my Imps a little more Tricksteristic. :D

Nice write-up! Being able to write creatively is something not all of us are capable of. Count yourself blessed because you have a talent. Getting into the mood in writing does not have a set of rules to follow. ‘To each his own’ is what people say; however, a list of suggestions wouldn’t hurt.tips on writing a book

Great write-up! Writing is a talent, and it must not be wasted. As with everything that we had been entrusted, we should let it grow and share it with the world.>learner motivation

You have no idea how important this is because this is the one thing that keeps you going in writing stuff you love. Essay thinker discounts help us more for any kind of writing services.