Man-Made Islands ... Cities of the Future? 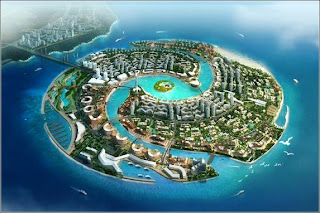 Problem: Many large cities, such as crowded Tokyo, are running out of space for an ever expanding population. And the problem is only getting worse as the global population increases. Especially for cities built on a shoreline such as an ocean or a major river where expansion is limited by mountain ranges or other geological obstacles.

Solution: Artificial islands. Man-made islands are an answer to finding suitable space to expand living, work, and leisure space. Man-made islands are constructed by people rather than formed by natural means. They are created by expanding existing islets, construction on existing reefs, or amalgamating several natural islets into a bigger island.

A number of countries have been reclaiming land for centuries such as the Netherlands. But man-made islands are an engineering feat that have only recently left the drawing board. And the vision will continue to grow exponentially into truly amazing cities and other marvels during our lifetime that will marvel the imagination

But Wait, That’s Not All: Airports are also being built on man-made islands. Japan and China are helping to lead the way. Yep, a mini-series is on tap for this very topic that will truly amaze you. Really. It will. San Diego has plans on the table for a solution to their land-locked airport that is in need of expansion. Check out this Reference.
Posted by Stephen Tremp at 8:01 AM

Hi Sephen .. I wish they wouldn't .. the seas have enough rubbish in them already and upsetting that applecart even more will lead to disaster ... what we do with housing - there has to be other ways ... living in all the houses available would be a good start ...

I was thinking the same thing as Hilary. What happens to all the displaced wildlife?

So true! I can't help but think of all the birds and animals that are affected by this.

I too have my reservations on this. Many ecosystems could be wiped out - although alternative systems could develop, I suppose...

The Dutch have been doing this for centuries. So has the U.S., Canada, Australia, well, basically most of the world. So it's nothing new. Ecosystems are displaced anytime a neighborhood is built. Or even a farm for that matter. We have to eat. Or a school or college campus. Or a park. Or a hospital. Even grass huts for a remote tribe in the Amazon, as eco friendly as they are, disrupts ecosytems.