Themes That Rocked the Challenge - Karen in Guatemala! 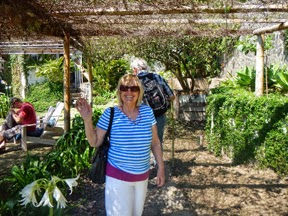 Today we welcome author Karen Jones Gowen and her rocking theme of life in Guatemala!

Your theme was living in Guatemala – which you do! What prompted you to select that theme?

We had recently moved and at the time, it was the most interesting topic I could think of! It also gave me an opportunity to take lots of photos with a purpose. 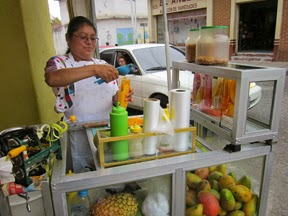 Which letter and topic was your favorite?

Probably "W" for women, because I find the Mayan women so fascinating. They work extremely hard, are quiet and family-centered, and they dress simply and modestly in their native clothing that has particular meaning to them. I admire the women I see around me in this community a great deal and I could have done an entire month on just that theme. Maybe I will!

I don't think there was a difficult letter because I had so much to say about my new environment there were usually numerous topics for each day. The hardest thing was narrowing it down to just one! Even X was easy because many items in the Mayan language begin with X-- it has the "sh" sound-- and we'd just been to visit the city of Xela. 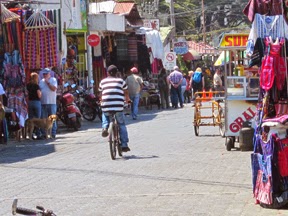 What would surprise people the most about Guatemala?

There are a lot of misconceptions in the U.S. about it, I think, and one of the most common is that it's a dangerous place with crime and bandits everywhere. I'm sure there are places you wouldn't want to go alone at night in the cities, but so far I've found a feeling a safety and neighborhood in the town of Panajachel, where we live. People watch out for each other and children, families, everyone are out on the streets day and night. I feel safe everywhere I go.

What was the biggest adjustment when you moved there?

Termites in the house! Apparently termites are part of living in Guatemala and they are everywhere outdoors, often finding a home inside as well. Our rented home has wood beams in the ceiling and I quickly learned the habits of these invaders. Finally, we moved out for a couple months while parts of the ceiling were being replaced, and although it's still a problem, it's not as bad. (I can't believe I'm even saying "not as bad." Guess I've adjusted a little!) 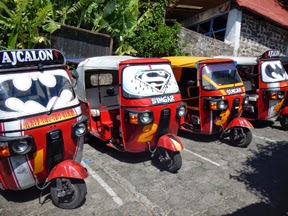 What is a tuk tuk?

It's a little car/scooter that holds 2 or 3 people plus the driver and functions as a taxi. For a small fee, they will drive you anywhere in town. And they are everywhere on the roads so it's easy to flag one down. 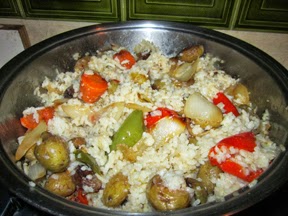 What’s the most unusual vegetable in Guatemala? And have you encountered anything you won’t eat?

So far I've been sticking to the ones I can recognize, like onions, carrots, squash and peppers. I used to like chicharones, or in English "pork rinds"-- they were a snack I enjoyed occasionally in the U.S., but the way they prepare them in Guatemala is a lot different. The first time I tasted them was the last. My dog loves them though!

Have you thought of a theme for next year’s Challenge?

I haven't yet decided, but it will somehow be themed around Guatemala. People really seem to enjoy learning about it and seeing the photos, and it helps me to appreciate the beautiful and interesting land where I now live.

You live in an awesome place, Karen. Thanks again for doing the interview!

That's quite an interesting interview, Alex. I remember Karen's posts from this April :)

I loved that theme. It was interesting. The termites though...wouldn't like that.

Thank you for the interview, Alex and A to Z Blog! I am looking forward to April and the A to Z Challenge again.

I love hearing about your new life.

I'm a writer and neighbor living in Nicaragua and I didn't get to your blog during A-Z April but I certainly will make time for it now. Sounds like our new countries have a lot of cultural similarities. Curious where you do most of your writing, inside or outside?

Great interview and learned allot on your site

I hope you will consider 'women' for your #challenge this coming year. Know it will be fascinating. Your description of the women in this interview will evolve into a book. Might as well get the chapters outlined by writing A-Z. Would love to know if this comes to pass. A great writing project!

Hi Karen - I certainly enjoyed your theme this year ... so will be very happy to read more about Guatemala ... fascinating insights you've given us here ... and to see how you're adjusting .. cheers Hilary

I remember Karen's posts too, definitely a great theme choice!

Thanks everyone for your comments and support! In answer to Shelina's question, I write indoors. Although I have a beautiful garden in front of my house where I can sit, it's too distracting to write outside. In fact, I do most of my writing in bed!

Thank you for featuring Karen, Alex. She is the definition of Woman of Valor, IMO, and now she's added "adventurer & explorer" to her other titles.

Hi Karen. This was great. Loved hearing about your life there. We really need to keep our eyes out for termites in Australia too. A yearly exercise to get the area around your house treated.

Hi Karen, I'd love to visit Guatemala some day. Sure, there are things I would not eat or even feed to my dog, so sticking to what you know is a good idea. Other than that there is such a cultural exchange to experience in Central America and there are plenty of safe havens for Americans to enjoy. Thanks for sharing with us!