The Moon is round 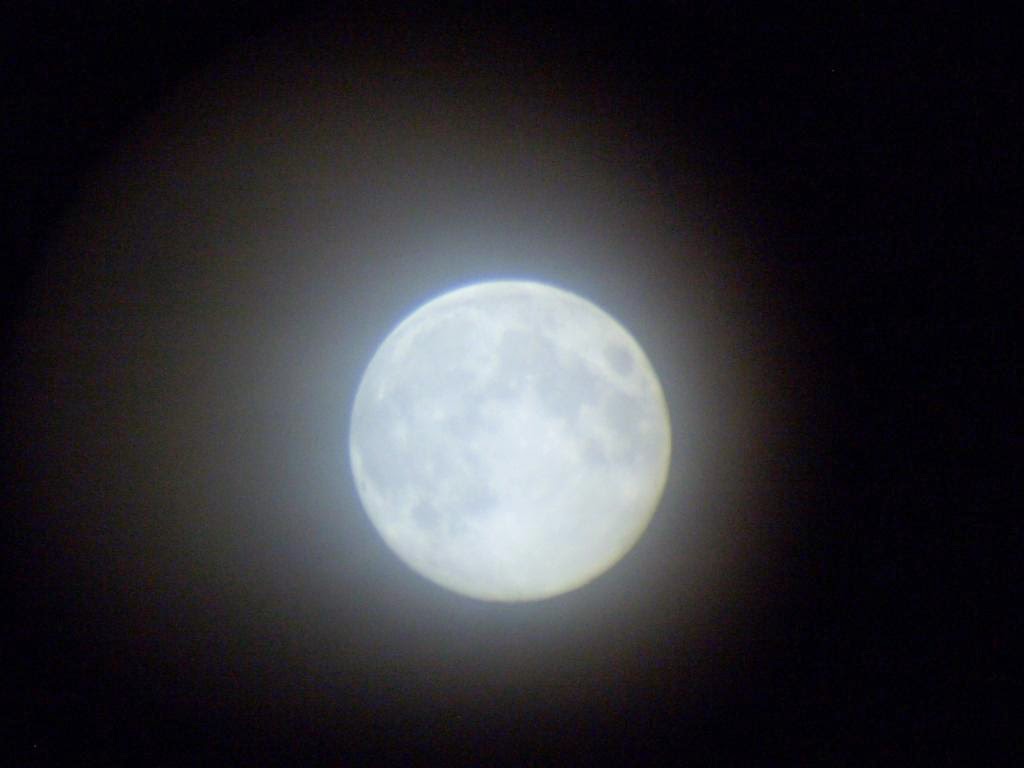 It's full moon tonight, and it'll be low enough in the northern sky to shine through my bedroom window when I'm asleep.  I explained why in my blog yesterday.

I like moon-gazing, in fact I like all sorts of natural phenomena, which is why I'm working on making that my theme next April. I'm a long way from being the only moon-gazer, and the moon has played a huge part in our folklore and mythology.  Csenge is a better person to tell you about that than me, and then, of course, there are all those other stories with reference to paranormal influences from the moon!

Whenever I see the phrase "The Moon is round" I think of an old game that was in a book of 'Wonders' I had as a kid, showing various party games to mystify your friends.  The idea was that you had a stick (or pole, or rod) which you used to draw on the ground a circle (representing the moon), then adding two eyes, a nose and a mouth with dots and a line.  You recited "The Moon is round, and he has two eyes, a nose and a mouth" followed by passing the stick to the person on your left and asking them to do it exactly as you did it.  Most of the time the person would not follow your actions perfectly, and you said "No, try again", or passed on to the next person.  Anyone that did it exactly as you had you congratulated, which mystified the rest of your friends even more.  The secret was that you drew the moon with one hand, but passed the stick into your other hand before passing it on, and most people never changed hands.  Silly, but a fun (or infuriating) way to pass the time - especially with nothing more than a stick to play with.

If you're still wondering about a theme for next April's A to Z Challenge, you could look at games, children's games, folklore, or your preferred science.  If you cover any of these things in your blog, why not add a link in the comments below.

Jemima Pett writes scifi-influenced stories for children and adults, including the Princelings of the East books - mystery with a time travel twist - and her new series about asteroid miners caught up in a freedom fight.
Follow her blog Jemima Pett, Author
The Princelings website
Facebook
Twitter
Pinterest

We are in the middle of a total lunar eclipse as I write this, and I have just been outside to watch it. It is supposed to be a "blood moon", reflecting the sunsets across the country as it travels across the sky.
We are on the east coast of Australia and of course it is Wednesday night here.

Romi @ In the Way Everlasting

(When I signed in, my comment disappeared. boo, so I'll recreate it.) Your books sound great. I'm not a sci-fi writer, but I am a star and moon gazer. I also left my shades up last night and around 2:30 am, I awoke to the silvery moon beams coming through my window. The blood red moon appeared around 4:30 am here, and I slept through that. But, as I was driving the kids to school for their 7am class, we were treated to the eclipse just coming off the moon. You can understand why so many stories center around the moon and other heavenly bodies. It's just us Earthlings trying to make sense of the universe, or are inspired by it!
Play off the Page

Never heard of that game. Although I do know it is to be a blood red moon tonight.

It's a while since I've seen a total lunar eclipse, although I did catch the end of one as the moon rose relatively recently. I hope you all enjoyed your blood moons :)

That game is a new one on me. I'll make a note for the next time I need to be really annoying with few resources :)

Alas, we were fogged in and couldn't see the eclipse.

Another really irritating game (we used to play this at college, which says a lot about our innocence then!). In one you take it in turns to name (anything, like stations is best, but you could use cities, etc) and you are told whether it follows the previous one or not by the 'leader' and anyone else in on the secret. Whether it is right or not depends entirely on whether you hesitate by saying er or um before you name the item. :O Drives people crazy trying to work out the sequence! Actually, that's why we played it in college - drove the intellectuals crazy!