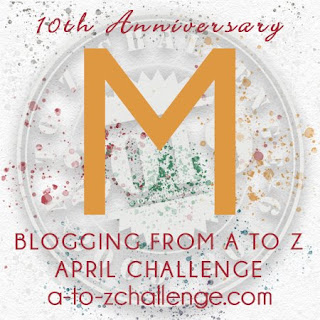 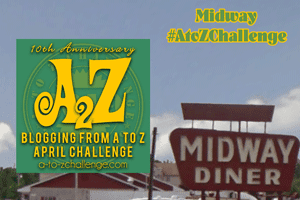 You've reached the midway point! In my neck of the woods, there's a place called the Midway Diner (it's between Harrisburg and Allentown, Pennsylvania, USA).

What to do now:

Celebration dancing.
Here's my thank you to the fabulous host and co-hosts of the A to Z blogging challenge.
My favorite mid-day food is chocolate chips, hold the cookie. It also works as a reward, so perfect.
Now it's time to go visit 23 more blogs, gotta go.
Never give up...never surrender! - Dragons & Spaceships

My favorite midday food is not something I can leave a cooment with, so I'm just commenting with my daughter's computer. I hope that's going to be okay.

Thanks, TS.
And Dave, I'm really wondering what, or who, you're eating...

Today I had a broccoli salad midway and it was good. 🥦 Jackie's Bookbytes Letter M

Yeay, midway mark! The challenge has proved therapeutic so far. :)
I can't pinpoint one favourite mid-day snack, but I just had a juicy apple and it has made me feel happy. :)

Midway... yay!
Favourite mid-day food, anything with cheese, usually, but I'm trying to make midday my main meal fo the day, so it'll be more than a cheese sandwich :)
I'm just making a puff pastry tart with marinaded vegetables, a few pine nuts and some goats cheese..... and it's in the oven :)

M is for Merrick, Joseph

Thank you guys hosting and co-hosting the AtoZ Challenge! I'm up to reply to every comment I received today, visiting back their blog of course, and discovering new to me AtoZChallengers!
My favorite mid-day food is a hot tea (the one called "Thé des Sages", tea of the wise men, with green and black tea, vanilla, jasmine, bergamot and mauve flowers) with one chocolate cookie (or more...)
Let's go for the second part of the fun!!
M = Mobilier

Mmmmmm My favorite part of lunch every work day is my dessert: Greek yogurt topped with my own homemade jam.

Oh hey, I know that diner! I currently live in Allentown, and I occasionally have to make the drive to Harrisburg.

Anyway, I'm definitely feeling good about reaching the midway point. We're halfway through the Challenge, and the end is in sight. Very exciting!

M is for Minimalism
M is for Magic Kingdom

my favorite mid day food is tea and cookies

Attempted a monologue, something which I could post in both the forums. A to Z and NaPoWriMo.A first time attempt at this form.

So far, so good! Doing extra comments today...because I can!

Thanks, and best wishes!
Cherdo
Cherdo on the Flipside
Blogging from A-to-Z April Challenge

Thanks for hosting the A2Z Challenge. My journey so far has be wonderful and awesome! Looking forward to the other interesting days!
My post for Midway is - https://anjus.home.blog/2019/04/15/memes-means/

Thank you to the co hosts for hosting this challenge. Mid way and midday - my midday meal was school lunch (I'm a teacher) and was Rice and dal, yogurt and a huge bowl of salad. Dessert was chocolate cake - yum.

Where would we be without the awesome A to Z team? In the ocean without a sail - or a bilge-pump. Midday snack is breakfast most days - coffee comes first.

my M word is up https://heavygators.blogspot.com/2019/04/a-to-z-blogging-m-is-for-mondegreen.html

thank you for the wonderful advice and thank you to the host(s) for hosting
this challenge
Playing catch up, is fun!!!