The team decided our theme for this month's posts here would be a take "2020 visions of blogging." This set of weekday posts focuses on:
A 2020 Look at the A to Z Team 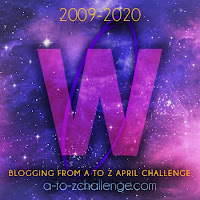 I sat down recently and asked Arlee Bird, who blogs at Tossing It Out and who is primarily responsible for starting the A to Z Challenge in 2009, twenty questions.

Thanks, Arlee. If you have any questions for him, leave them in the comments!

Email ThisBlogThis!Share to TwitterShare to FacebookShare to Pinterest
Labels: #atozchallenge

Thanks Arlee for the answers. This year I specially thank you for the A to Z Idea. Helped me to write about companies and I hope the issues that I covered or uncovered about industrial engineering practice in those companies will be of help to the IE profession. I got good response to many of the articles from IE professionals. I thank A to Z team because the idea came because of the format of writing. Best wishes to you all.

have a great week everyone!
https://ladyleemanilablog.wordpress.com/2020/04/27/thursday-photo-prompt-eve-writephoto/

Whoa, this interview was on fire! Do you know what else is on fire? Magma Elementals on the plane of Wildfire.

Please to read you Arlee ;) Great interview!
W is for Women

I'd like to thank Arlee for regularly commenting on my blog. One question he wasn't asked was how much time he spends commenting on other people's blogs.
https://suestrifles.wordpress.com/2020/04/27/w-is-for-washing-feet/

15 minutes to write a blog post!,, I would be happy if I could write mine in 2 hours... which is why I wrote about finding time to blog as my post for the letter T. I found some interesting suggestions that I’m pursuing but I doubt they will get me to a15 minute post.

W for Wooing a Lady

Thank you for starting the A to Z blogging challenge Arlee. It's been the best motivator for my writing.

this interview series is going great, its good to know the hosts blogging journey.

It's always fun getting better acquainted with you, my good friend. I sympathize with your sleep pattern. DH suffers with the same issue. During the week, we tend to go to bed around 9pm and on the weekends usually around midnight. This weekend we were up way past our normal time as we were binge watching a new series. I think your posts are always fun and I especially enjoy how you generally close each one with a set of questions to prompt blogger interaction which is a splendid way to involve your readers. I wouldn't call you a lazy blogger but I understand where you're coming from because I often feel that way about myself. I do appreciate your continued dedication to keep this annual blog fest going and I'm very happy that we met through the blogging platform. Who knew you once lived not too far from me? Have a blessed and joyful day, my friend.

Susan Sanderson, I'm almost embarrassed to admit that unlike years ago I now spend very little time commenting on blogs. I always intend to spend more time exploring and commenting, but time seems to get away from me as I pursue other things.

Great answers to great questions and may I say a great man I actually met some years ago in LA. I apologise from missing this challenge as the global crisis made me feel to unwell to participate regulary.

Arlee is cool
This is my fourth year of the challenge. And Arlee has always commented on few of my blog posts in last 3 years. But this year he has been conspicuous by his absence. So this interview comes like a whiff of fresh air.

W is for Work/Life/Wife. This is not a didactic post on how to manage work-life balance. So read at your own risk.

Interesting to get some background on the person responsible for us all checking in here. Thanks.

Facts About Pompeii: W is for Wine

Songwriting! A fact that I was not aware of. But my bad for just visiting Arlee hit and miss, usually during the challenge. We are apparently alike in the commenting department. Nothing other than gettin busy in life. And haven't been offended by views of Arlee just for the record. :)
https://katytrailcreations.com/2020/04/27/we-write-letter-w/

Thanks to you all for the kind and encouraging words!

Arlee thank you for all you have done to encourage bloggers. It is appreciated and I certainly hope you are still blogging in 5-10 years!!!


Wow that's an interesting one, thanks for sharing hit interview, we got to know a lot about Arlee

Crap, I put hours into my posts...
You started blogging just two months before I did! And I am still around.

I am so glad to read this post and would like to appreciate Arlee for initiating this challenge as I am participating for the last 6 years and I am happy because it keeps me motivated and at least this one month i blog regularly. Thank you once again and it was nice to know you a little more.

I wish it only took 30 minutes to write one of my blog posts...

An A-Z of Faerie: Witches

Thank you Arlee. My second year and it's been a wonderful experience both times. Such variety of content and so much learning. Congratulations Arlee!
Https://soniadogra.com