X in Noughts and Crosses #atozchallenge 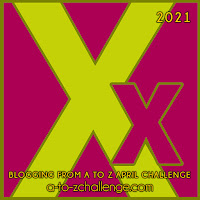 Noughts and Crosses, or Tic Tac Toe, is a very old game. There is some debate among historians as to when it first began (ancient Egypt or ancient Rome) and what was originally used to make the board and pieces. (It's suggested that it was four sticks, pebbles, and coins.) As it evolved, it became a game of unity between Christian and Jewish children.

The X represented Christianity, as it came from chi. (The Greek letters for Christos, chi (looks like an X) and rho (looks like a P), is an early symbol for Christianity and for Christ Himself. Emperor Constantine is likely responsible for crafting the letters together.) The o or 0 is a kikel, a circle in Yiddish. Many Jewish immigrants used an O rather than an X as their signature in the early days of Ellis Island. The 0 is also known as a nought. The name tic tac toe wasn't given until the 20th century.
The object of the game is to get three of your symbols in a row. Players take turns selecting one of the nine squares. Statistically, the player who goes first has the greatest chance of winning. Marking in a corner first is considered the best move.

Be sure your blog displays a participant badge so everyone knows they're in the right place!
Please consider getting a t-shirt.

The Master List - know what blogs are officially taking part in the 2021 challenge:
https://docs.google.com/spreadsheets/d/1mvSm8FsuFVkOQulQ0EgzslGiNd8CZWWrqaRhCG8Sv4o

Uranus needs to quit trying to see under our clothing...🤣

Today is the "HEA" of my short story. Y&Z are not as happy, and definitely not ever-after.

The post is in English, the restaurant name is not.

I have learned something new from this post.
https://suestrifles.wordpress.com/2021/04/28/xenophobia-atozchallenge/

A fact I didn't know about, never too old to learn.

X is one of the toughest alphabets
http://poojapriyamvada.blogspot.com/2021/04/xo-newnormal-a2z.html?m=0

We used to play this often during classes. The teacher would think we were taking notes, but you know, this is more fun. ;)
https://sri-lovenature.blogspot.com/2021/04/xelvona-tour-lets-go-goa-again.html

Fascinating info about the letters - as a typographer, sometime signwriter and graphic artist I didn't know those facts...
https://how-would-you-know.blogspot.com/2021/04/x-is-for-xenobiology-stranger-than.html

tic-tac-toe is a regular game with my kiddo I love it. Didn't know of the debate surrounding it.

X is always the hardest one, but I found certain statue...

I was clueless of the history of a favorite childhood game and quite interesting. Thanks for the education.

I don't think we in the UK really knew noughts & crosses was called tic tac toe until the film Wargames came out (still one of my favourites). :)

X is always hard for me. I can't believe we are almost through... it makes me sad. I kinds cheated on my X word. You can play along here: Xtra Xtra Read all about it

Fascinating! I like reading the history of childhood games.

Wow! I didn't know the history of tic-tac-toe!


I loved this game until my son started beating me at it easily. Then I started ending it in a tie... it became boring.

Wow! Who knew the background to a simple children's game.
https://cassmobfamilyhistory.com/2021/04/28/xmas-food-and-festivities/

We always played noughts and crosses when we had to sit still and quiet in a class when others were writing tests and we didn't -- from primary school right through high school.

Ronel visiting for the A-Z Challenge with an A-Z of Faerie: Iron and Fae

X is for Xebec
http://imagery77.blogspot.com/2021/04/a-small-three-masted-sailing-ship.html

very cool history on Tic tac toe thank you
Todays post is on the Xenops https://heavygators.blogspot.com/2021/04/a-to-z-challenge-x-is-for-xenops.html

did not know about the history behind this game..very interesting..
my x post that i forgot to add here
The ‘X’ Poet and Something eXtra -Ordinary?!