Everything You Wanted To Know About Co-Host DL Hammons, But Were Afraid To Ask 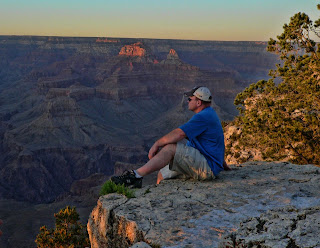 Not an envious position, following the Blogfather himself – Alex J. Cavanaugh – but I’m always up for a challenge.  Here are my answers to a few of the questions our A to Z followers submitted.

1) You're house in on fire, assuming your kids, pets, and other living things are safe, what do you grab as you head out the door?  All of our important documents are tucked away in a fireproof lockbox, so I won’t worry about that.  What I will grab is our external hard drive, which holds copies of all our family pictures, and my writing.

2) What's your biggest frustration in blogging?  Unless you’ve written a couple of best sellers and are universally appealing, to be done right blogging takes a lot of time, which is something of a precious commodity these days. I get frustrated when I can’t get around to as many other bloggers as I’d like.

3) What's the most awful thing your mother ever forced you to eat?  Liver, and Peas.  I’m getting body shivers just thinking about them. YUCK!

4) Where do you go to "Get away from it all"?" I don’t really have a “man cave” (though I wish I did), and my ultimate getaway – an Alaskan Cruise -- isn’t really cheap, so I’ll just say my writing.  When I’m in the middle of a story there’s no place I’d rather be.

5) What reason did you have to sign up for the A to Z and what did you expect to gain from entering?  Two reasons. First, the exposure. Second, I decided last year to make it uncomfortable in my comfort zone, and this fit the bill.

6) Where do you hail from?  I’m a military brat, so technically I have no hometown.  I was born in Honolulu, Hawaii but our family was constantly on the move (mostly east coast) up until my high school years.  I went to high school in North Carolina and college at LSU.

7) Have you ever wanted to be a rock star?  In my youth I entered more than a few air guitar contests…so that would be a YES.

9) How often do you comment on other blogs? My own personal code is if another blogger comments on my posts fairly consistently, then I’ll add them to my Google Reader and read their blogs faithfully.  That doesn’t mean I’ll comment on every blog post though.  If someone were to post a review of a book I have absolutely no interest in, I won’t comment just to comment.

10) Which is your favorite fictional character and why?  Sherlock Holmes…the iconic example of a
flawed hero who breeds awe and sympathy.

11) If you were a contestant on the CBS show "Amazon Race" and could pick ANY movie character to be your partner, who would it be and why?  John McClain from the DIE HARD movies.  Yippee Ki-yae!

13) Describe the last Halloween costume you wore. You know what they say about pictures. 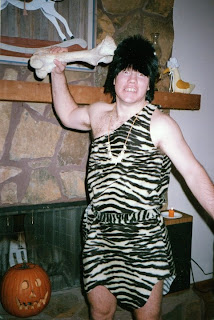 14) Are you smarter than a 5th Grader?  I’m not “smarter” than anyone, but sometimes I happen to know the right answer.

15) Name an item that you have too much of.  Rejection letters.

16) What items could you typically have in your pockets?  My keys, a flash drive, and a pen
knife.

If I left out a question/answer you’d really like to know, just leave it in the comments below.  And if you get a chance, drop by my permanent home at Cruising Altitude 2.0.
Posted by DL Hammons at 11:58 AM

More time and pie are two things I'd love to have right now. And me thinks the cave man needs a man cave! (:

Elise is right, a cave man needs a man cave. Your comment about the Blogfather made me spit tea on my screen. Gonna come clean it up? Didn't think so...

We all wish for more time...
Alaskan Cuise? Worth every penny. You can take one vicariously - I went with my best friend for her 50th birthday in August. I have a lot of pictures and musings...so check my August 2012 archive. Or email me for links. Then you can drool on your keyboard and we'll be even...
Tina @ Life is Good
Co-host, April 2013 A-Z Challenge Blog
@TinaLifeisGood, #atozchallenge

Great picture!!! Were you supposed to be Bam Bam Rubble or are you lobbying for a man cave?

@Tina - I'll definitely be checking out your archive for that August post!

@JoJo - I actually had a man cave when that picture was taken...and BAM BAM was my inspiration!

The peas I grew up with I hated, but then after I became an adult I discovered pea salad and loved it. And I've always been a fan of liver--it's probably not that good for me, but I do like it.

Thanks for being a part of this great A to Z Team.

Lee
Wrote By Rote
An A to Z Co-host blog

Nice to know more about you, DL.

And Elise is right. You seem very comfortable in that caveman costume.

I won't have the time to be in the A to Z but will lurk and comment a bit on the participants who do post.

Great post. I really enjoyed reading your answers and cannot wait to participate in the A-Z challenge.

Great photo, DL!
Where were you in North Carolina?
Liver is disgusting no matter how you dress it up.

@Arlee - You made me shiver again! It's an honor being part of this awesome undertaking!

Love the picture, have a couple of hubby in similar rig many years ago. I should blog about it I guess.

An Alaskan cruise, eh?! While you're waiting for the opportune moment to embark, I think you should write a YA horror about a bunch of kids on an Alaskan cruise. Your critique partners might enjoy reading that...

Cool answers, but the photos ... that's what drew me in. :) And man, do I know about rejections -- too many, too pain-ful. Nice to meet another co-host. Enjoyed the post.

Love the answers to #s 4, 11, 15!
And I'd say skip the cruise and fly into Alaska and spend your days hiking the gorgeous mountains. One of the most beautiful places on earth!

Liver and peas are delicious - but NOT in the same meal of course. Peas goes down really well in chicken curry and liver with onions in a brown gravy and served with mashed potatoe, is delicious.
Is that picture meant to be a Fred Flintstone impersonation?
Why Alaskan and not Mediterranean cruise?

If you can wait til April 10 (I think that's I) I am posting a delicious liver recipe, and I don't like liver.

Love the Med, but if it was a choice of the Med and Alaska, I too would choose Alaska.

Nice getting to know a bit more about you, as well!

We need a photo of you doing that air guitar, DL!

"Not an envious position, following the Blogfather himself – Alex J. Cavanaugh – but I’m always up for a challenge."

Wait a second, my friend, the ethos I embrace is an all different, all equal, sharing, caring blogging community. Nothing to be envious of at all :)

DL, thank you for sharing a little bit about your good self. Even though there is no way I would ever be part of this alphabet challenge, I wish you well and may all who participate, embrace a positive and interactive ethos.

With respect and goodwill,

I had fun reading your answers!

D and L were great letters to for topics for A/Z; had several different choices for each of them. Now X is a different story.

Great costume, you looked very authentic! Glad to get to know you through this format!

Perhaps you'll be happy to know that I have fallen so far behind, I am reading your post before Alex's!

Great answers! I know what you mean about not having enough time. I get really frustrated trying to find a balance between networking and writing. I'd love to go on an Alaskan cruise someday too.

@PK - Then I'd better start getting in shape. Your right though, gorgeous country!

@Michelle - I've done both type of cruises, and Alaska is by far my favorite. I'm more of a cold nature type of guy.

@Mark - I heard someone else use the name and I loved it!

@Diane - Don't know if one exists.

@Gary - The challenge is nothing if not exhilarating!

@Betty - It was natural...except for those boxer shorts underneath. :)

@Andrea - LOL! I do feel better as a matter of fact!

And where is the pocket in the caveman outfit?

Awesome to get to know you better DL. And great interview questions. They were really fun.

Liver - yuck! German chocolate cake and pecan pie are my hubby's favorites, too. Great Q & A!

Love the costume. You're brave. I try to hide all the photos taken of me in costume. Too bad there's this little thing called Facebook that so many people like to "tag" me in!

Looking forward to the challenge this year. Like you, I'm using it this year to get out of my comfort zone. This should be fun!

Visiting bloggers takes time. I so can relate to that comment. Pecan Pie is the best!I like your idea of not commenting just to comment...could save some time, when visiting blogs:)

@Jen - Stretching ourselves is definitely a good thing!

@M.J. - I believe that commenting just to comment does a disservice to us both.

Fun photos, and yes, I hate liver too.

Oh my lord, as if the Ninja himself didn't need yet another nickname that reminds us of his hold on the online universe. Ha! A clever one, you are :)

Liver...yuck! I'm down for some peas tho and am not ashamed to say it. If you didn't get rights to keep your man cave after channeling BAM BAM, then the mrs has some explaining to do. We need a recount...and I vote Yes for the man cave. Lol.

That was fun all the way; the interview and the responses!

You seemed like an old hand at being interviewed DL! It went very smoothly and you seemed to be so comfortable!

Peas are one of my favorite vegetables. When I was younger I simple adored liver and rice smothered in gravy and onions. I'm a vegatarian today!